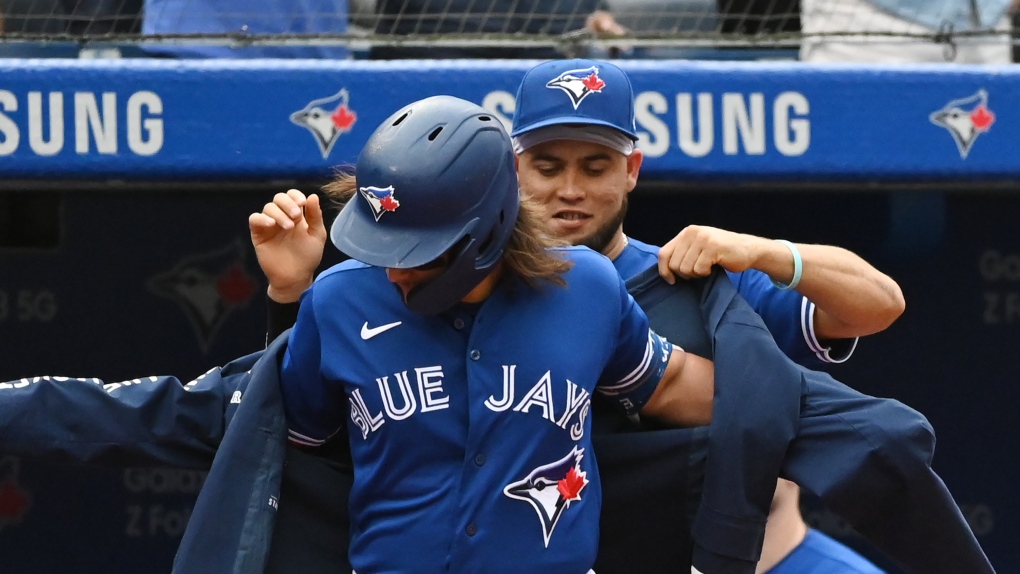 TORONTO -- Bo Bichette knocked in five runs, and starter Robbie Ray struck out 13 to lead the Toronto Blue Jays to a 6-3 win in the rubber match against the Tampa Bay Rays on Wednesday.

Bichette slammed a three-run homer in the first inning to provide the cushion Ray required to pitch Toronto (82-64) to its second win in the three-game set against the Rays (90-56), who have the best record in the American League.

The win was the Blue Jays 16th in their last 19 outings and allowed them to keep pace in the AL wild-card race.

The Toronto lefty has been particularly powerful in his last six outings, striking out a total of 66 opponents. He allowed only four hits in his seven innings of work on Wednesday and did not walk a Tampa Bay batter.

His lone blemish was a full-count slider that Rays catcher Mike Zunino knocked over the left-field fence to lead off the fifth inning.

Bichette already had provided his teammates with a 4-0 lead by the time Zunino belted his 30th homer of the season.

After Ray struck out two in a one-two-three first inning, Blue Jays infielder Marcus Semien was issued a one-out walk from Tampa Bay starter Michael Wacha (3-5). Vladimir Guerrero Jr. then doubled to left. Bichette knocked them in with a homer to left -- his 25th of the season.

In the third inning, a Semien single to left and a Guerrero double to left centre put runners, once again, on second and third. Semien scored on Bichette's sacrifice fly to right.

Bichette's infield bouncer up the middle for a hit scored designated hitter George Springer in the fifth inning. Springer singled to centre with one out and exhibited good hustle going from first to third on a Wacha wild pitch with Guerrero at the plate.

The big offensive day for Bichette came on Roberto Clemente Day, which celebrates the late Pittsburgh Pirates Baseball Hall of Famer. On Tuesday, it was revealed that the 23-year-old Bichette was the Blue Jays nominee for the Clemente Award, given annually to the player who "best represents the game of baseball through extraordinary character, community involvement, philanthropy, and positive contributions, both on and off the field."

Guerrero, who reached base for a third time with a walk in the fifth, scored on Teoscar Hernandez's single to centre.

Joakim Soria relieved Ray to start the eighth. He got into trouble with a lead-off single to Taylor Walls and a two-run Brett Phillips to centre field.

But Soria settled down to finish the inning with a three-run advantage, and Jordan Romano finished off Tampa Bay with his 18th save in a one-two-three ninth inning.

This report by The Canadian Press was first published Sept. 15, 2021.