Rob Ford 'unnecessarily reckless' when he crashed into councillor: commissioner 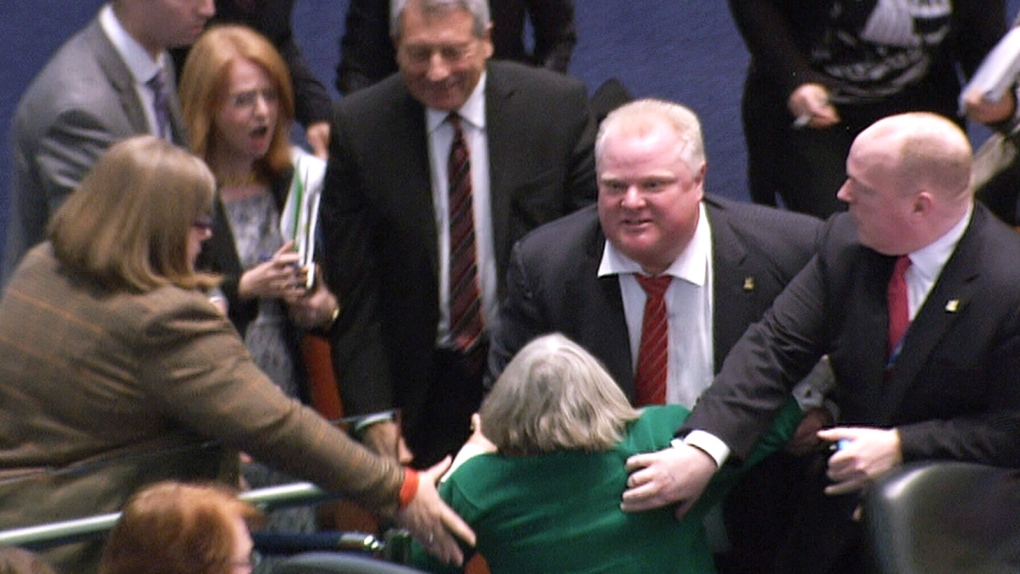 Toronto's integrity commissioner says then-mayor Rob Ford was "unnecessarily reckless" when he accidentally knocked over a city councillor during a televised high-stakes meeting two years ago.

In a report to be presented at next week's council meeting, Valerie Jepson says the collision on Nov. 18, 2013 caused Coun. Pam McConnell "physical and emotional harm."

The incident occurred during a special meeting that saw Ford stripped of most of his powers and budget following his admission that he had smoked crack cocaine during his term in office.

Ford's brother, then a councillor, was involved in a dispute with members of the public and the mayor rushed to his brother's side, knocking McConnell off her feet.

Video of the incident "became notorious on the international scale," and Jepson says McConnell "has become unwillingly connected to the incident and its notoriety."

The integrity commissioner says Ford, now a councillor, accepts her findings and has agreed to pay $1,000 to an unnamed organization in his colleague's riding. He will not receive a tax receipt.

Though she is asking council to rule Ford breached its code of conduct, Jepson said she is not seeking any further penalties.

Ford told Jepson he acted "out of an overwhelming sense of family and personal obligation," she said. He has apologized to McConnell and to council.

"It was an accident that (former mayor) Ford ran into Coun. McConnell. However, there was nothing accidental about (his) decision to run through the chamber," Jepson said in the report.

McConnell "remained stoic" after the incident, despite suffering from facial bruising and hip and shoulder injuries, Jepson said.

"She did not immediately appreciate the physical consequences to her and it was not for many months that she began to realize that the incident had taken a toll on her emotional well-being."

Another report earlier this year found Ford violated the council's code of conduct when he used racial slurs in two separate incidents. He later apologized to council and said he was "deeply ashamed" of his actions.