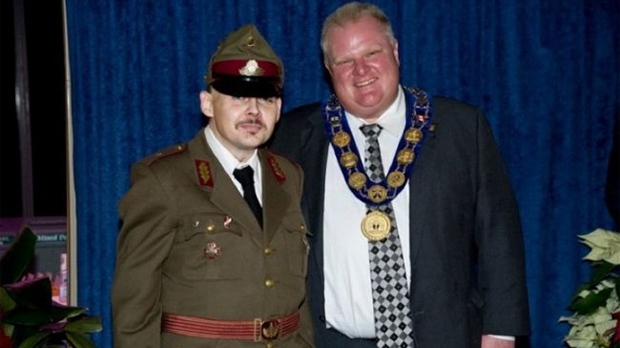 Toronto Mayor Rob Ford’s office issued a response responded to criticism Thursday after a photo of the mayor posing with white supremacist surfaced on the Internet.

In the photo, which was posted on a blog called Anti-Racist Canada, Ford is seen standing next to Jon Latvis, who is dressed in a military uniform and is sporting a neatly-trimmed moustache.

The photo was taken during the 2012 New Year’s Levee at Toronto City Hall.

A statement released by the Office of the Mayor said that Ford meets with, and poses for photos with, thousands of residents each year and this picture was one of up to 750 pictures taken with the mayor that day.

“At no time was the mayor aware of allegations that this individual had made racist, hateful or otherwise offensive comments, nor were any such comments made during his meeting with the mayor,” said the statement, released by Ford’s press secretary George Christopoulos.

“Mayor Ford is a strong supporter of Toronto's Jewish community and strongly deplores anti-Semitism in any form,” said the statement.

According to a band webpage, Latvis played lead guitar in a heavy metal group called Rahowa and has performed with another band called Aryan.

The term Rahowa is a word used by white supremacists to describe a war against Jews and other races that they view as undesirable.

The statement released by the mayor’s office said that Ford met briefly with Latvis on another occasion, after the photo was taken.

“The mayor routinely receives these requests from members of the public and makes every effort to accommodate them whenever possible,” the statement said. “In March 2012, the gentleman met briefly with the mayor to discuss his concerns which primarily focused on transit issues.”