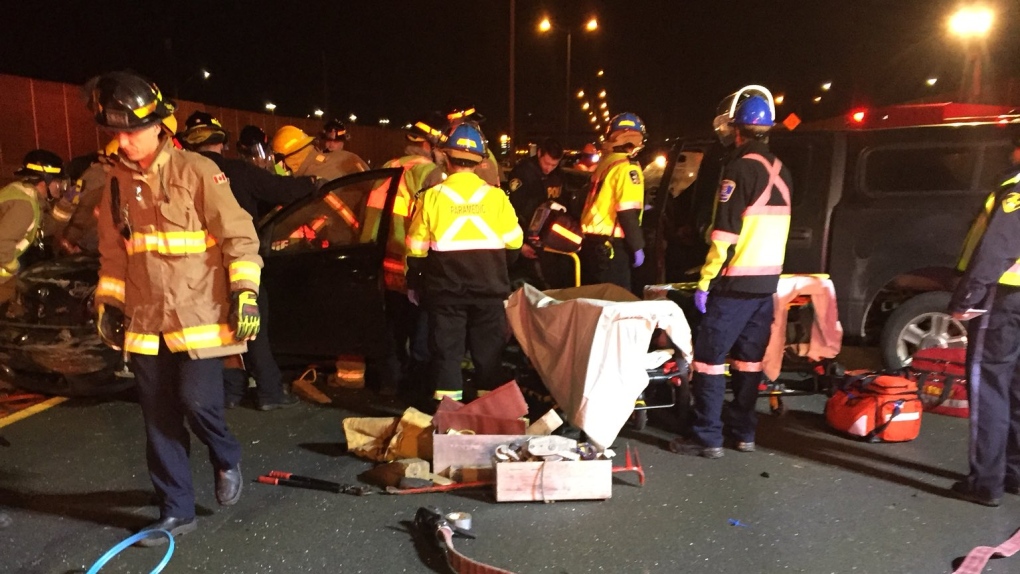 Emergency services respond to the scene of a multi-vehicle collision on the QEW near Cawthra Road Saturday January 27, 2018. (@Peel_Paramedics /Twitter)

A multi-vehicle crash that left one woman dead and another fighting for her life in hospital may have been the result of a road rage “brake check” by a driver who sped away as the collision unfolded.

The five-vehicle collision happened in the Toronto-bound lanes of the QEW, east of Cawthra Road in Mississauga at around 10 p.m. Saturday night.

A total of seven people were injured in the crash, one of whom had to be cut out of a vehicle by first responders.

Two women were rushed to hospital with critical injuries. One of the women died of her injuries after arriving at hospital. She was identified by Ontario Provincial Police Sunday as 22-year-old Nicole Turcotte of Niagara Falls. The other woman is still fighting for her life in hospital.

In an update Sunday afternoon, OPP said the multi-vehicle crash may have been caused by a vehicle that was not even directly involved in the collision.

“This crash happened as a result of what may have been an experience of road rage on the highway that did not involve the victims of this crash,” OPP Sgt. Kerry Schmidt said in an update on social media.

Schmidt said that while a total of five vehicles were involved in the collision, there may have been a sixth vehicle that was indirectly involved, triggering a chain reaction.

“Investigators now believe that prior to this crash taking place, a vehicle similar to a Honda Civic travelling in the middle lane moved in front of traffic travelling in the left lane and slowed down, applied their brakes and did what they call a ‘brake check’” Schmidt said.

“The driver behind that vehicle then slowed as well to avoid a collision, but the ensuing traffic behind these vehicles triggered a multi-vehicle chain reaction.

“Four vehicles back, a pickup truck slammed into the back of a Toyota that was carrying three occupants, including Nicole Turcotte, as well as another female passenger in hospital and the male driver.”

Witnesses said the lead vehicle sped up after braking and then took off, Schmidt said. That vehicle was last seen exiting the QEW at The West Mall, between Mississauga and Toronto.

The suspect vehicle was a dark colour and had a recently registered license plate that may have included the letters #CE, police said.

“Those kinds of actions where drivers take liberties trying to demonstrate what they believe is right or wrong may have completely unexpected consequences,” Schmidt said.

He urged the driver to get a lawyer and contact police.