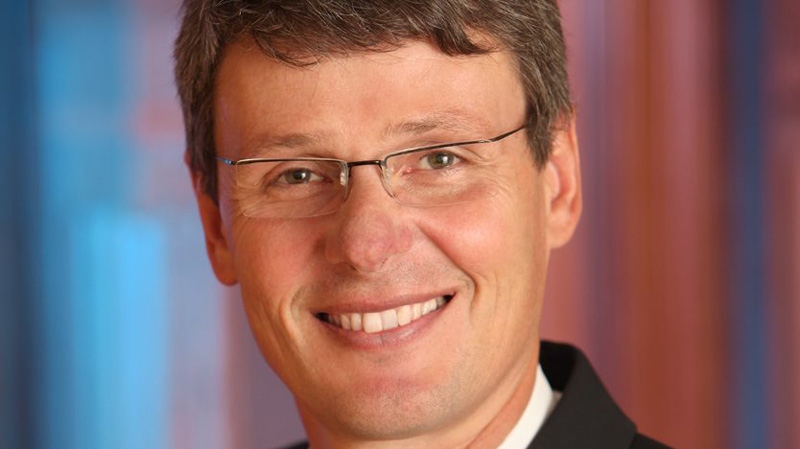 This undated photo provided by Research in Motion shows Thorsten Heins, who on Sunday, Jan. 22, 2012 was named President and Chief Executive Officer of Research In Motion. (AP Photo/Research In Motion via The Canadian Press)

TORONTO - Research in Motion shares fell again Tuesday amid continuing questions about whether the BlackBerry maker's new chief executive and new chairwoman will be able to fix the global smartphone company.

In the two days of trading since Canada's premier information technology company announced Mike Lazaridis and Jim Balsillie have stepped aside as co-CEOs, while remaining directors, RIM has lost about $1 billion in market value.

The stock (TSX:RIM) was down about three per cent or 47 cents at $15.20 on the Toronto Stock Exchange on Tuesday on the heels of a near 10 per cent drop on Monday. The shares closed at $17.24 on Friday.

Scotiabank analyst Gus Papageorgiou suggested there are ways for RIM to do better, including licensing its QNX operating system to other smartphone makers, but new CEO Thorsten Heins said Monday that wouldn't be a priority.

"We continue to believe this tactic could prove mutually beneficial to RIM and other handset ventures," Papageorgiou wrote in a note to clients.

"We do believe it could represent a significant strategic and financial advantage for the company."

RBC Capital Markets analyst Mike Abramsky noted that the changes were positive for the company, but didn't bring additional tech industry experience to RIM's board.

"It's unclear to what extent the new CEO will be able to materially impact the vision and direction of the company in light of the rapidly changing competitive conditions," Abramsky wrote in a note to clients.

"We remain concerned RIM's window is narrowing to pursue other strategic options should its plans prove less than successful."

RIM announced late Sunday that Heins, the company's chief operating officer, would replace Balsillie and Lazaridis as chief executive and Barbara Stymiest, a former CEO of the company that owns the Toronto Stock Exchange, would become chair of the RIM board.

Activist shareholder Vic Alboini, who has been pushing for changes at RIM for several months, said Monday the changes announced on the weekend didn't go far enough because they left Lazaridis and Balsillie with too much influence.

Alboini, president of Jaguar Financial Corp. in Toronto, repeated his call for a strategic review that would consider every option, including a sale of the company or part of it.

The adoption of RIM's new QNX-based BlackBerry 10 operating system has been delayed and fraught with difficulties in recent months, but Heins has said that his focus will be on improving the company's move to the new system this year.

"QNX also has significant history and presence in various industrial segments, such as automotive, and we expect RIM to leverage its ties in these adjacent markets to gain an advantage," Papageorgiou said.

RIM was once Canada's most valuable company, worth more than $70 billion, but has a stock market value of around $8 billion.