TORONTO -- Residents in a North York neighbourhood that has been deemed a COVID-19 hot spot camped out for hours overnight in order to get their names on a list to receive a vaccine.

The City of Toronto will only administer vaccines to those 50 and up but a number of community agencies and healthcare partners have begun holding pop up vaccine clinics in neighbourhoods with higher levels of transmission, where anyone above the age of 18 is eligible for a shot.

Those clinics required that people pre-register.

However, the clinic is back in operation today and this time residents have been told that they will have to line up to receive an appointment card.

The line began forming outside the community centre after midnight and by early this morning hundreds of people were in line.

The line stretched all the way around the community centre, onto the sidewalk and through several adjacent parking lots. 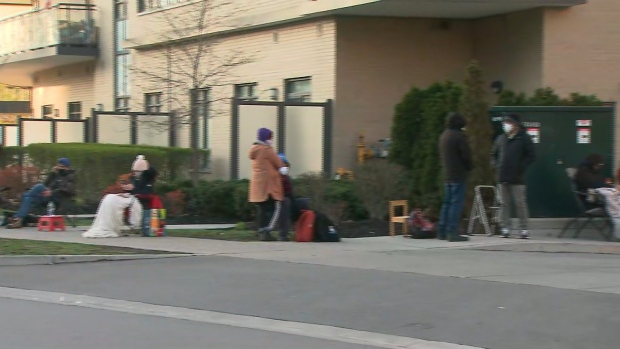 The hospital says that the first 750 people in line will be given a same-day appointment for between 11 a.m. and 7 p.m.

Speaking with CP24 earlier on Monday, Mayor John Tory said that the pop-up clinic is part of a “big push” that is now underway to ensure that people in the areas of the city with the highest COVID-19 cases counts can get vaccinated, regardless of their age.

“This is an example of something we are going to be doing more and more of,” he said. “There was one that was put this weekend where more than 1,300 people were vaccinated on Tobermory Drive with the clinic set up on a basketball court. The people in that case were notified by people literally knocking on doors and telling them they can get vaccinated and we are going to be repeating that exercise over and over again.”

Earlier this month, the Ford government released a list of 114 postal codes where residents above the age of 18 would be eligible for a vaccine.

The government, however, was criticized for not initially providing residents with any information about how to receive a shot, leading to widespread confusion as many tried and failed to book vaccinations at city-run clinics.