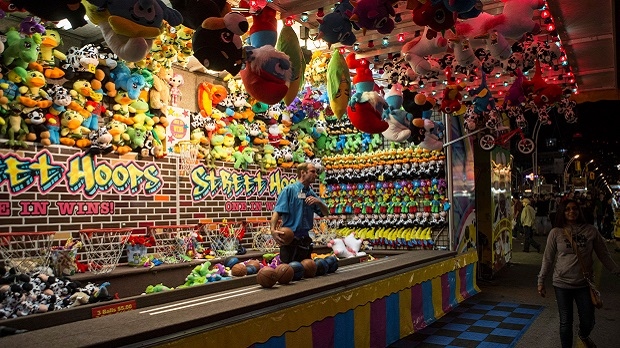 An attendant tries to attract a customer at the Canadian National Exhibition in Toronto on Saturday, Aug. 23, 2014. (Chris Young / THE CANADIAN PRESS)

A policy that allows those living with disabilities to attend the Canadian National Exhibition for free could once again be on the chopping block.

A new report under consideration by the CNE says that those with disabilities should now be required to pay admission but their caregivers should continue to accompany them for free.

Coun. Mike Layton, one of the city councillors who sits on the CNE’s executive committee, told CP24 Monday that the recommendation is in line with admission policies at other Toronto attractions.

“That is just advice coming from this stakeholder committee that is coming forward,” Layton said, adding that a final decision will likely come in the next couple of months.

“There is an affordability barrier for individuals both with disabilities and without and we want to as a board of the national exhibition look at what we can do to ensure that it is accessible to everybody.”

The CNE has previously said that about 10,000 people receive free admission to the fair each year because they have a disability or are the caretaker of someone with a disability.

This is not the first time the CNE has considered eliminating the policy.

Last year, the CNE announced that it would no longer be offering free admission to people with disabilities but reversed that decision about a week later after facing harsh criticism from disability advocates.

At the time, the CNE said that in light of the “valuable feedback” it received, it would defer the proposed change to its admission policy to hold public consultations.

"We’ve gone back, had a year of consultation and (are) making some recommendations," Coun. Paula Fletcher, one of the CNE board members, told CP24 at city hall on Monday.

"Just because you are disabled doesn’t mean you can't pay."

Fletcher said she does have one amendment she would like to see made.

"The only thing I want to tweak is if you are disabled but on disability, you don’t have much money and I don’t want to see those folks unable to get to The Ex," she added.

Fletcher said the CNE is implementing changes to make the annual fair more accessible for people with disabilities.

"One of the good things is that The Ex needs to be accessible, people in wheelchairs, people that are blind, people have to be able to move around this great fair so that is part of the new plan," she said.

Layton added that the CNE will also consider how it can make employment policies more inclusive to those living with disabilities.

“We could be doing more to ensure that people with disabilities are included as part of the employment strategy for The Ex and I know that is something that they are looking at," he said.

In a written statement issued by the CNE Monday, Virginia Ludy, the CNE's CEO, said the public feedback they received will help the fair "enhance its overall experience for all visitors."

“We’re excited to explore ideas and solutions that will help foster long-term opportunities to engage persons with disabilities within the organization, and look forward to reviewing the public’s feedback and final recommendations to help us move towards a more inclusive and accessible CNE for years to come.”