The trees, believed to be hundreds of years old, were slated to be cut down on Dec. 5 to make way for an archeological assessment of the site before construction begins for the Ontario Line.

However, the Law Society of Ontario (LSO) confirmed Tuesday that the removal of the trees had been postponed.

The governing body said in a statement that it welcomes the “temporary reprieve.”

“Thanks to the efforts of community members, stakeholders and partners who have raised concern over the removal of five trees from the historic grounds of Osgoode Hall, Metrolinx has now agreed that this removal is not necessary to facilitate an archaeological assessment for the Ontario Line station Metrolinx proposes for the site,” LSO said.

The group added that it is looking forward to the findings of an independent review by the City of Toronto on the site and that it “will continue discussions to pursue all reasonable options to lessen or eliminate the impacts of Ontario Line development on Osgoode Hall and its grounds, while balancing the complex needs of Toronto and the region.” 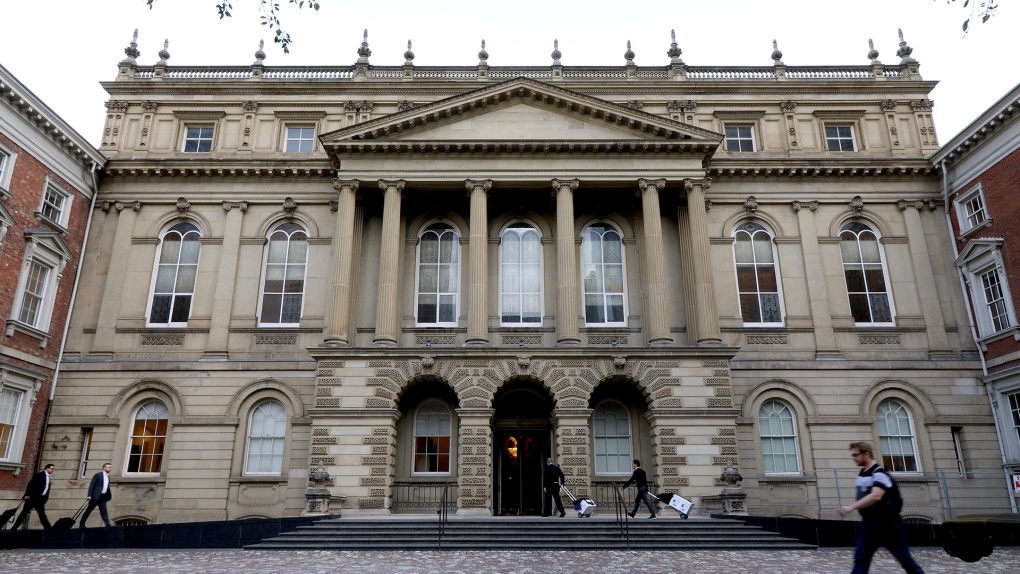 Osgoode Hall is seen in Toronto on Wednesday, Sept. 25, 2019. THE CANADIAN PRESS/Colin Perkel

Metrolinx said in a statement that it found an alternative method that would accommodate archeological work at the site before the trees are removed.

The Queen Street West and University Avenue property is the future site of Osgoode Station. It is one of the 15 stops in the planned 15.6-kilometre Ontario Line, which will run from Exhibition Place to the Ontario Science Centre.

Mayor John Tory said last week that he wants to see the city conduct an independent review before any trees are removed from Osgoode Hall.

“We would expect that report will be public, and we further expect that Metrolinx will discuss all its plans publicly before any work is undertaken,” the mayor’s office said in a Nov. 22 statement.

“Mayor Tory has a mandate from voters to get transit built, including the Ontario Line, but he will be advocating throughout this process for Metrolinx to be respectful of the communities around these projects.”

Meanwhile, the cost of building the Ontario Line has nearly doubled from initial estimates, according to provincial documents.

In 2019, it was pegged at $10.9 billion with a completion date of 2027. However, recent documents from Infrastructure Ontario suggest that the price of building the Ontario Line could balloon to $19 billion.

Also, the line won’t likely open to the public before 2031.

PM Trudeau presents premiers $196B health-care funding deal, including $46B in new funding

Biden aims to deliver reassurance in State of Union address