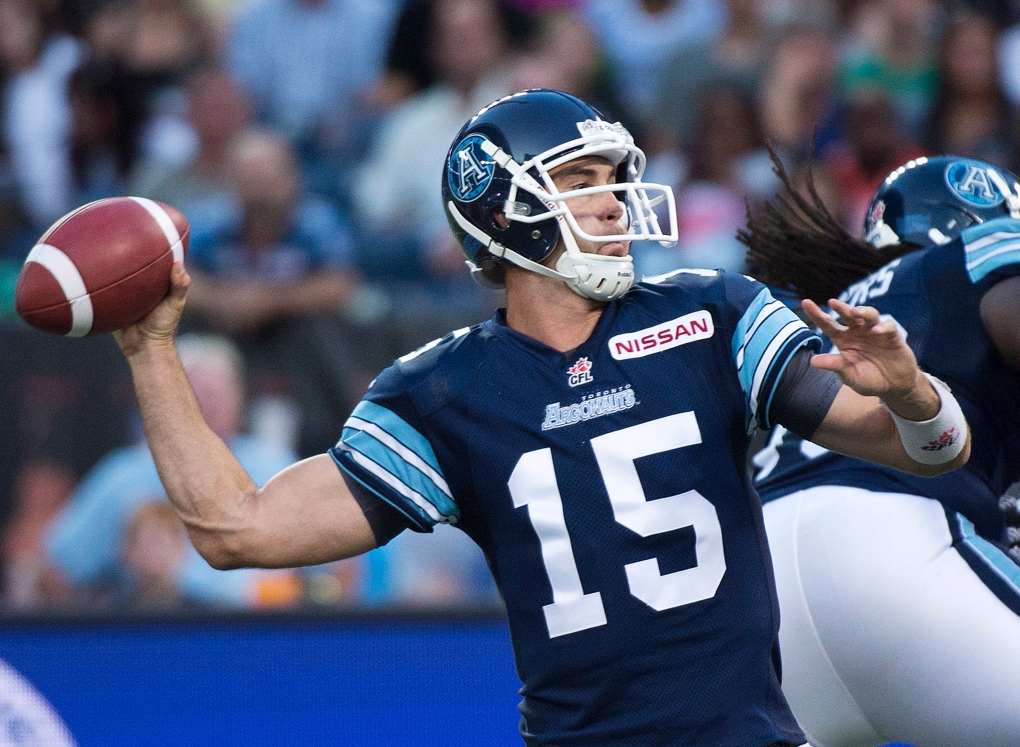 TORONTO -- Ricky Ray threw three touchdowns and tied a club record for consecutive completions Sunday as the red-hot Toronto Argonauts continued to roll with a 36-33 victory over the Edmonton Eskimos.

Ray finished the night 30-of-35 for 413 yards, including TD passes to Jason Barnes, John Chiles and Chad Owens against his former team as Toronto (5-2) won its fourth straight.

Ray's 17 straight completions in the first half tied an Argonauts' club record set by Mike Rae in 1975 in a game against the Montreal Alouettes.

Backup quarterback Zach Collaros also threw a TD for Toronto, which is on its longest winning streak since 2007 and leads the CFL East Division by six points over the second place Hamilton Tiger-Cats.

Edmonton quarterback Mike Reilly was 35-of-46 for 511 yards and three touchdowns as the Eskimos (1-6) lost their fifth consecutive game.

Leading 17-16 at the half, Toronto stopped Edmonton on its first drive of the third quarter and stretched its advantage to eight when Ray hit a wide open Chiles with a 31-yard touchdown pass that required some fancy footwork from the rookie receiver to stay in bounds.

Edmonton then conceded a safety for a 26-16 Argonauts lead with just under five minutes to go in the quarter. Toronto followed that up with an efficient four-play, 64-yard drive that was capped off by a six-yard TD pass from Ray to Owens that made the score 33-16.

Desperate for something positive, the Eskimos then watched as Shaw missed a 28-yard field goal and had to settle for a single point with just over ten minutes to go in the fourth.

Reilly connected with Shamawd Chambers on a 22-yard touchdown pass with about five minutes left on the clock to make it 33-23, but Edmonton's attempt at a two-point conversion failed.

The Eskimos got the ball back and Shaw kicked a 30-yard field goal to cut Toronto's lead to seven with two minutes to play.

Toronto took the ball on its own 35 and Ray found Chiles on a 49-yard pass play to set up Noel Prefontaine's 26-yard field goal, his second of the night, that effectively killed off Edmonton's hopes.

Reilly then hooked up with Fred Stamps, who finished with 171 yards receiving, with one second left on the clock.

Trailing the Eskimos 9-7 in the second quarter, Ray hit Barnes on an eight-yard touchdown pass to put the defending Grey Cup champions back out in front. The six-play, 75-yard drive was highlighted by a 26-yard run by Toronto running back Curtis Steele.

Edmonton retook the lead at 16-14 with an impressive six-play, 105-yard drive that spanned just 1:58 and included completions by Reilly of 38 and 45 yards to Stamps and culminated in a five-yard strike to Cary Koch.

The see-saw quarter swung back in favour of the Argonauts with a 20-yard late field goal by Prefontaine to make the score 17-16 at the half. Toronto could have had more but Ray, who was acquired by Toronto in a trade with Edmonton prior to last season, missed a wide open Dontrelle Inman in the end zone to snap his consecutive completions streak.

Toronto took a 7-0 lead in the first quarter on third-down gamble when Collaros, who often comes into the game on short yardage plays, faked a pitch before dumping the ball off to Alexander Robinson. He rumbled 45 yards to the Eskimos' end zone for his second touchdown of the season.

Edmonton got the score to 7-6 on a pair of Shaw field goals from 16 and 38 yards before the Eskimos kicker gave his team a two-point edge with his third boot of this night, this time from 40 yards early in the second quarter.

Notes: Edmonton won both meetings between the teams last season. The Argonauts beat the Eskimos in the East semifinal. ... Chiles has three TDs in his last two games. ... Sherritt recently underwent thumb surgery and is out indefinitely. ... Toronto's next game is Friday against the Calgary Stampeders (5-2) at Rogers Centre in a rematch of last season's Grey Cup game. ... Edmonton welcomes the West Division-leading Saskatchewan Roughriders (6-1) to Commonwealth Stadium on Saturday. ... The last time Toronto won four straight was in 2007 when the Argonauts were victorious in their final seven games. ... Attendance at Rogers Centre was 19,656.