Raptors to celebrate championship season before tipping off new campaign 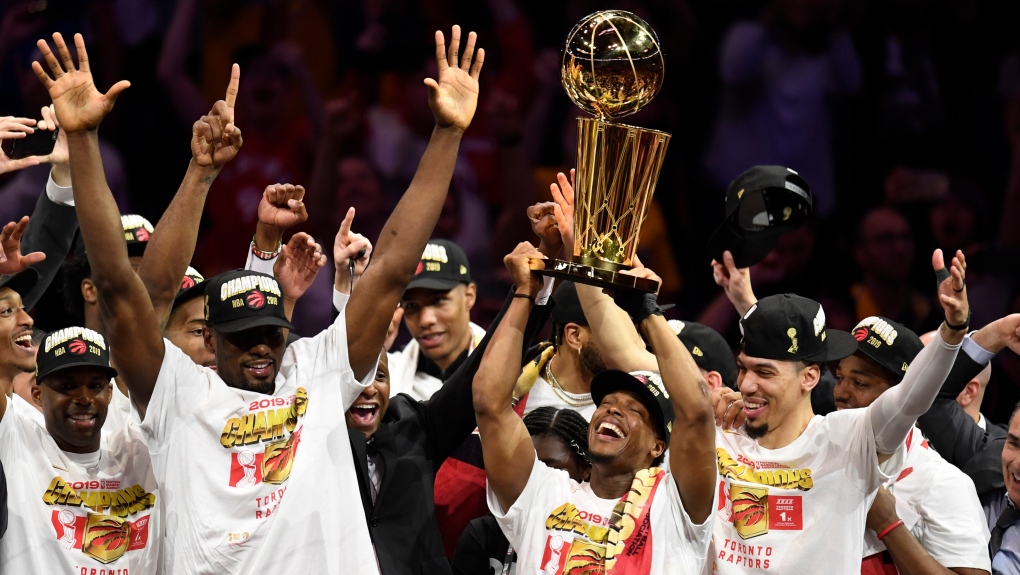 TORONTO -- Before the Toronto Raptors get on with the business of trying to defend their NBA title, one last celebration is on tap.

A ring presentation and unfurling of the franchise's first league championship banner is set for Tuesday night at Scotiabank Arena. The festivities will put a bow on the Raptors' remarkable run through the playoffs last spring, capped by a six-game win over the Golden State Warriors in the NBA Finals.

"I feel so thankful for this moment," Raptors forward Serge Ibaka said Monday. "This is my 11th year in the league. All the things I've been dreaming, it's happening."

The veteran core of that championship team is back this season, although starters Kawhi Leonard and Danny Green left in free agency.

Newcomers Stanley Johnson, Rondae Hollis-Jefferson and Matt Thomas are in the mix too for a team that Las Vegas has pegged to be in the playoff mix but well down in the NBA pecking order.

The new campaign begins with the regular-season opener against the New Orleans Pelicans.

"We're still good ... we've got players who can play," Ibaka said. "After the NBA Finals, everybody got toughness, mental toughness. We know how hard it is to win games. We know how to play together and we don't give up. We're good, man."

Head coach Nick Nurse has been trying out different looks and lineups during training camp and the pre-season. He has the luxury of going really big if he wants to and can also rely on a variety of three-point weapons.

"It's a good team," Nurse said. "I don't know how it will all shake out but I think it's a team that's very capable of winning a lot of games and being really tough to beat.

It will be interesting to see who gets the ball at crunch time for the Raptors. Leonard was a go-to guy last season so it may fall to the veteran Lowry or Siakam, the NBA's most improved player who finalized a four-year contract extension Monday.

"I think one of the things that I've always done well in my career is just playing off instincts," Siakam said. "Understanding and kind of like adapting to whatever was thrown at me.

"Just figuring it out and getting to the point where I can be the best player that I can be."

A 27th overall pick in 2016, Siakam broke out last season, averaging 16.9 points, 6.9 rebounds and 3.1 assists a game. His averages rose slightly in the playoffs.

Siakam's extension, worth a reported US$130 million, kicks in after this season.

"I've always believed that it was possible because I believed in the work," he said. "I always trusted that if I did everything that I was supposed to do, I was going to get to this point. I didn't know when it was going to happen but I knew that if I continued to follow the steps, (it would.)"

"I think ultimately the success of last year, Pascal's hugely important role on that team, Pascal's ascension to potentially being a foundational piece for us, carried the day," he said.

Pre-season prognosticators have not been kind to the Raptors. Las Vegas sportsbooks have Toronto anywhere from a 35-1 pick to a 50-1 shot to repeat.

The over-under regular-season win total predictions are hovering in the mid-40s despite last season's 58-24 effort and second-place finish in the Eastern Conference.

"There can only be one favourite, that's why they're called the favourite," said VanVleet. "I don't think we're that this year. But I don't know if there is one this year and that's the beauty of the game.

"It's a long season and I'm really looking forward to it. We'll find our way along the journey."

The Pelicans, who are coming off a 33-49 season, won't have first overall pick Zion Williamson in the lineup Tuesday night.

RAPTORS WAY -- Toronto Mayor John Tory will officially unveil new street signs as a part of the pre-game celebration. The city has ceremonially renamed Bremner Boulevard as Raptors Way. A new LED screen is up in the Jurassic Park viewing area as well. It's 37 per cent larger than the previous one.

This report by The Canadian Press was first published Oct. 21, 2019.