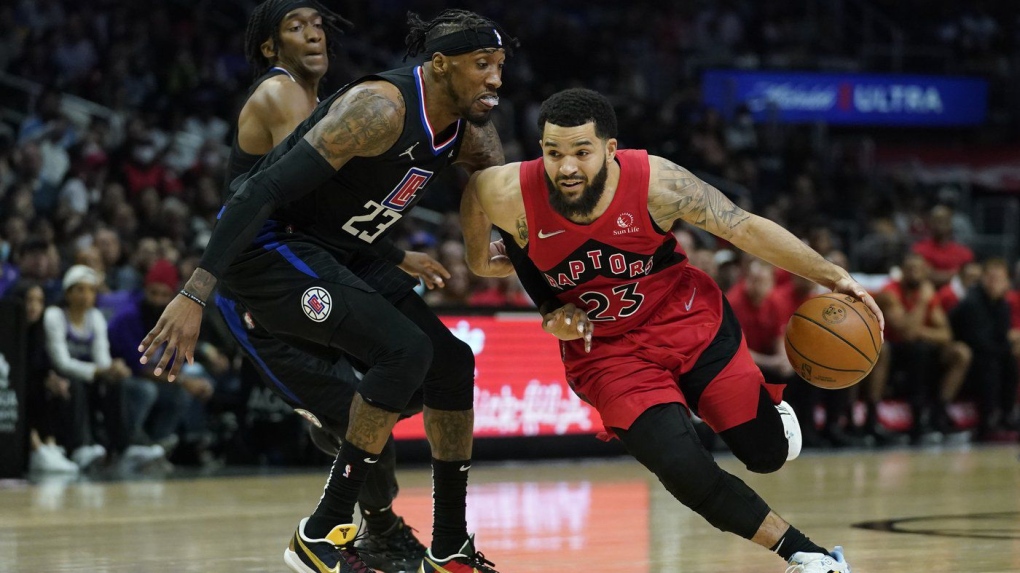 Los Angeles Clippers forward Robert Covington (23) defends against Toronto Raptors guard Fred VanVleet (23) during second half NBA basketball action in Los Angeles, Wednesday, March 16, 2022.&nbsp;The Raptors dodged this week's NBA play-in tournament, buying VanVleet -- and others nursing nagging injuries such as OG Anunoby -- an additional week without games, but the success of this playoff run will fall at least partly on the shoulders of the scrappy native of Rockford, Illinois. THE CANADIAN PRESS/AP-Ashley Landis

If a long Raptors post-season run depends on having Fred VanVleet at his best, the sight of the all-star guard in street clothes in Toronto's last three games of the regular-season wasn't reassuring.

While VanVleet is expected to play Saturday when the Raptors tip off their opening-round playoff series against the 76ers in Philadelphia, how is his ailing knee feeling?

“How'd I know that was gonna be the first question?” the guard said with a smirk on Thursday.

The Raptors dodged this week's NBA play-in tournament, buying VanVleet -- and others nursing nagging injuries such as OG Anunoby -- an additional week without games, but the success of this playoff run will fall at least partly on the shoulders of the scrappy native of Rockford, Ill.

“Getting a little bit of rest, getting some time off, getting some time to work out, get back in shape, get my timing back . . . I've had a pretty good week of work,” VanVleet said. “I'm getting ready for this series. It could go really good or really bad. I'm optimistic about it. I feel good. Continue to do all my work and my rehab.”

VanVleet, who has a bruised knee, didn't play in 11 of the Raptors' last 24 games. He said the injury is “not going anywhere,” but added he's “definitely feeling a lot better than the last time you saw me.”

The 28-year-old is averaging a career-high 20.3 points and 6.7 assists a night this season, and earned all-star honours for the first time.

His steely poise has seen him take over plenty of games down the stretch. And his dogged work ethic is unmatched. The iconic image from Game 4 of the 2019 NBA Finals -- VanVleet on his back on the Oracle Arena floor in Oakland, Calif., arms splayed, blood streaming from a gash under his eye, one of his teeth lying nearby -- is proof enough.

VanVleet, however, struggled in the first two series against Orlando and Philadelphia in that historic run to the Larry O'Brien Trophy.

“It was humbling, very humbling. I had to get better,” he said after practice at OVO Athletic Centre, a towel draped over his head, steam-room style. “There were more conversations I had to have with the coaching staff in terms of where I feel like I'm effective.”

The turning point for him in those playoffs, he said straight-faced, was Kawhi Leonard's buzzer-beater in Game 7 against Philly. It kept Toronto alive. It gave VanVleet another chance.

“There are trials and tribulations in everybody's career. I study the game,” VanVleet said. “I watch basketball every night and I see it. When it's your turn to be in the fire, it's not fun. But just about everybody goes through it.”

VanVleet expects a tough series against the Sixers, who “a couple of weeks ago were title favourites,” he said.

Cameroonian big man Joel Embiid leads the league in scoring, while Sixers guard James Harden was the league MVP and top scorer in 2018.

VanVleet said winning possession will be huge, and it's a big part of the Raptors' identity. They're second in the league in offensive rebounding, while Philadelphia is 30th. Toronto is eighth in overall rebounding to 29th for Philly.

Outside of crashing the offensive glass to win games, does Toronto have a Plan B?

Chris Boucher echoed VanVleet. Embiid has said no other team can shut him down like Toronto. And Nurse, the Raptors' head coach, has proven masterful in defensive scheming -- raising some eyebrows along the way.

“We've gone from box-and-1 to zone to man-to-man to, (defences) I didn't even know were in the book,” Boucher said. “It's the playoffs so who knows what else he has in his book, but it's going to come out and y'all are going to see it and we're all going to learn (about) it at the same time.”

Raptors fans learned about Nurse's box-and-1 during the 2019 Finals. A defensive strategy normally seen in grade school, Nurse employed the box-and-1 to stifle Steph Curry. While Curry dismissively referred to the defence as “janky” after the game, it worked.

“Nothing Nick does surprises me now on the court as a coach. It doesn't surprise me. That one kind of caught me off guard, but yeah, it was innovative,” former Raptors guard Kyle Lowry said after that game. “Never practised that ever. I don't think I've ever run a box-and-one in my life, I'm going to be honest with you.”

A healthy Anunoby will also be key for Toronto. He missed 15 games for the Raptors with a fractured finger earlier this season, but was excellent upon his return before suffering a thigh contusion and missing the final four games of the season.

“Remember when OG didn't play for like two weeks, he came back and looked like himself?” Boucher said. “That's how he's looked (in practice). He's going to be ready for the playoffs. I haven't seen anything that makes me think he won't be ready.”

Game 2 of the seven-game series is Monday in Philadelphia and then the series comes home to Scotiabank Arena for Game 3 on Wednesday. Game 4 is April 23rd, and if necessary, the series shifts back to Philly for Game 5.

This report by The Canadian Press was first published April 14, 2022.