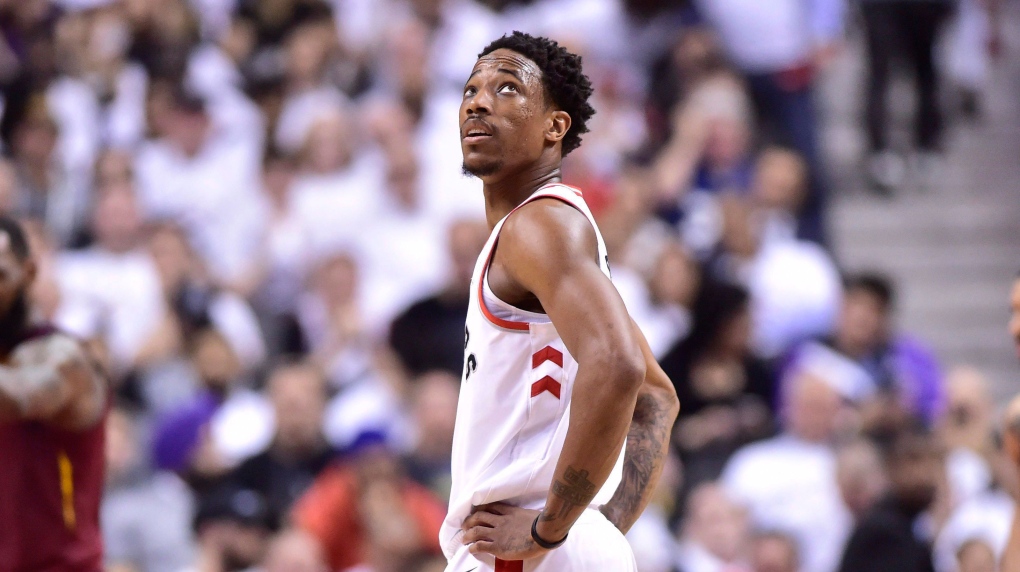 Toronto Raptors guard DeMar DeRozan (10) looks up at the scoreboard late in the second half NBA playoff basketball action against the Cleveland Cavaliers in Toronto on Thursday, May 3, 2018. THE CANADIAN PRESS/Frank Gunn

Toronto Raptors shooting guard DeMar DeRozan has been named the winner of the 2017-18 Magic Johnson Award.

The award is presented annually to the NBA player who best combines excellence on the court with media and public co-operation.

DeRozan joins Chris Bosh (2009-10) as the only players in Raptors history to receive the award.

"I'm grateful to the reporters and broadcasters who cover our league, who love our game and who communicate with our fans every day. So thank you to the PBWA for this award," DeRozan said in a statement. "It's very special for an L.A. guy to receive an honour named for Magic."

DeRozan, a four-time all-star, averaged a team-best 23 points and a career-high 5.2 assists while helping the Raptors to a franchise-record 59 wins during the 2017-18 campaign. He also earned plaudits this season for being open about his battle with depression and helping create a dialogue about mental illness.

Kevin Durant of the Golden State Warriors, Paul George of the Oklahoma City Thunder, Manu Ginobili of the San Antonio Spurs and Al Horford of the Boston Celtics also were finalists for the award.

Members of the Professional Basketball Writers Association selected the winner through a vote.

The PBWA created the award in 2001 in honour of Los Angeles Lakers Hall of Famer Earvin (Magic) Johnson.