TORONTO -- A peaceful protest was held in downtown Toronto on Saturday afternoon in support of the Wet’suwet’en hereditary chiefs as rail blockades continue to stall rail traffic across canada.

Hundreds of demonstrators gathered at Queen’s Park before marching down along University Avenue towards city hall.

The group is standing in solidarity with the Wet'suwet'en hereditary chiefs and their supporters who are opposed to the construction of the Coast GasLink pipeline, which crosses their territory in northern B.C.

On Friday, Prime Minister Justin Trudeau called for an end to the blockades saying that Canadians impacted by the demonstrations are "running out of patience."

Beth Cox, who was among the group, said Saturday's rally and all other protests are important not just to show solidarity with Indigenous people across Canada but also to create awareness about the issues they are facing.

"A lot of people see people protesting and just think of it as a disturbance without really understanding why it's necessary," Cox said. "If I can lend my voice and my presence to help make people want to ask more questions and create discussion, I think that's important." 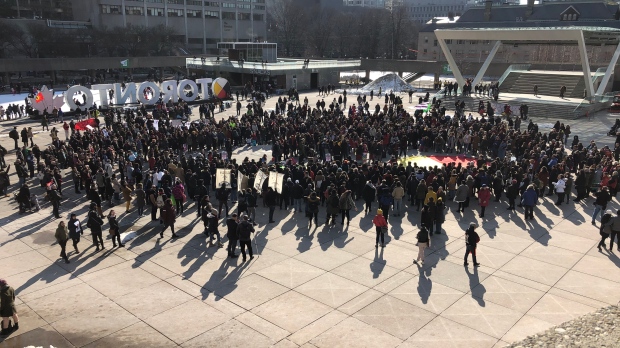 Cox said she understands that the blockades have been inconvenient for many. Business leaders have raised concerns about how stalled rail traffic is impacting industries, such as agriculture, that rely on trains to move their products.

But Cox said the blockades are an effective way to spread awareness as to what the Wet'suwet'en are fighting.

"Having a blockade of the railroad is unfortunate, but I think that if it creates dialogue and really necessary pathways to having true reconciliation, then it's important," she said.

"We have to realize that Indigenous people in Canada have been at an inconvenience for decades, hundreds of years with being pushed off their lands and treaty rights not being respected."

When asked what the government needs to do to resolve the situation, Cox said they need to humble themselves and do more than acknowledging the fact that they are trying to negotiate. 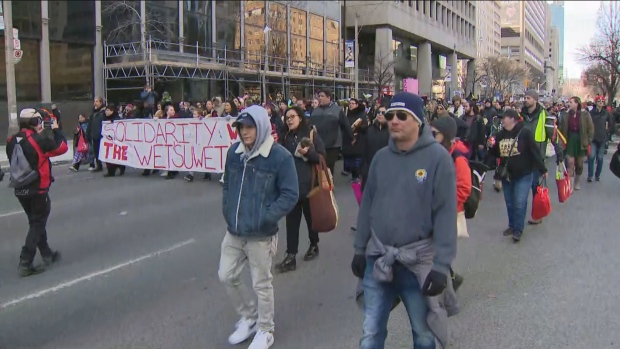 Another protester said he is at the demonstration to stand with the Wet'suwet'en people.

"We stand with our people and support the Wet'suwet'en people," said Greg, who is from the Georgina Island First Nation. "The RCMP needs to leave."

He said the leadership in Canada right is a "joke" a day after Prime Minister Justin Trudeau called for an end to the rail blockades around the country, telling protesters that court injunctions must be respected.

"He's not facing these issues and doing what should be done, which is telling the RCMP to get out of the territory," Greg said.