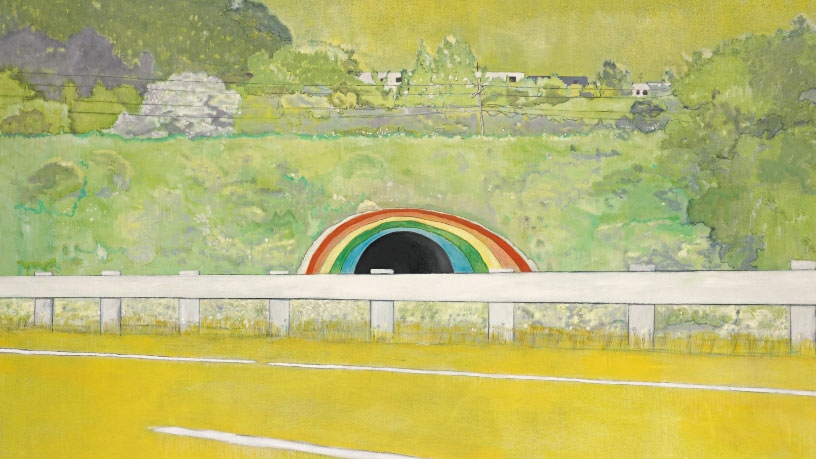 A painting of a rainbow over a culvert seen from the Don Valley Parkway is expected to fetch $16 million at an auction in London, U.K. at the end of the month.

Peter Doig's "Country-rock (wing-mirror)" will be up on the Sotheby's auction block on June 30, 15 years after it was painted.

The oil painting, which measures nearly two metres long and 2.7 metres tall, shows the famous rainbow tunnel on the east side of the northbound DVP.

The actual rainbow was painted by Norwegian Berg Johnson in 1972, in honour of a friend who died on the DVP the year before. Johnson, who was 16-years-old at the time, told local media he wanted to make people smile.

The bridge has been officially sanctioned as public art, and is maintained by volunteers and a non-profit art restoration group called Mural Routes.

Doig's representation of the bridge has been on display in New York, Vancouver, Ottawa and Toronto.

The Sotheby's catalogue describes his painting as distinctly in the internationally-acclaimed artist's style: "nostalgic without being specifically reminiscent, entrenched in fabled Canadian roots, and characterised by his trademark otherworldliness."

"Country-rock (wing-mirror)" is said to be one of the 55-year-old painter's most recognizable works.

"'Country-rock (wing-mirror)' is a prime example of the mood which Doig has forged in his painting: an ethereal but tense otherworldliness that suffuses his subjects with a muted numbness," the Sotheby's curators wrote in the catalogue.

The painting goes up on the block on June 30 at approximately 2 p.m. ET.

In May, Doig's painting "Road House" was sold by Christie's auctioneers in New York for about $13 million.