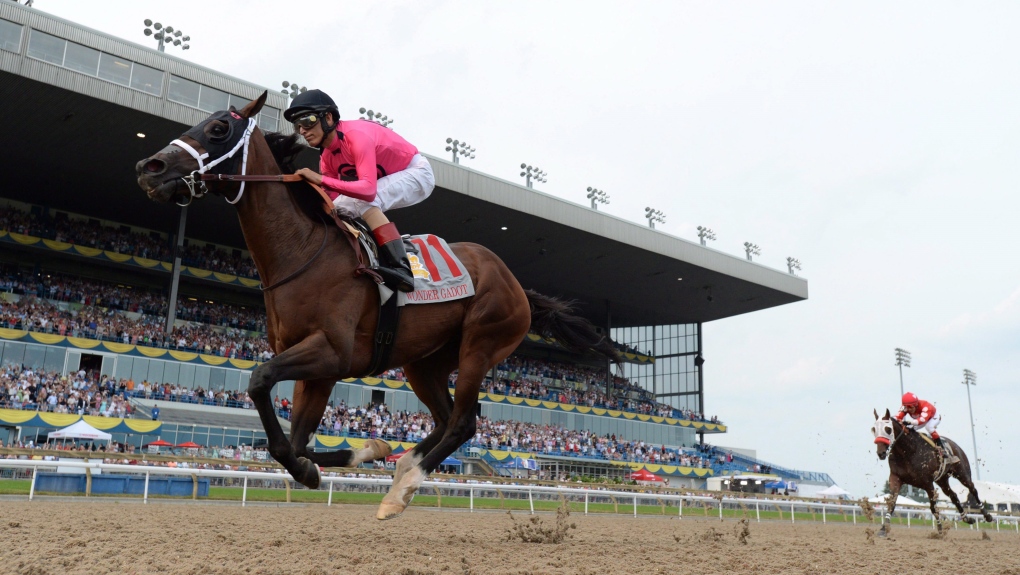 Wonder Gadot, with jockey John Velazquez aboard races towards victory during the Queen's Plate at Woodbine Racetrack in Toronto on June 30, 2018. THE CANADIAN PRESS/Frank Gunn

TORONTO -- While Toronto's ban on city-led events through June 30 does not prohibit professional sporting contests during the COVID-19 pandemic, two major annual events say they are close to making announcements on their status for this year.

Woodbine Racetrack says it is discussing the "potential postponement" of the Queen's Plate on June 27. Golf Canada and RBC say they will have further announcements on the RBC Canadian Open June 11-14 at St. George's Golf and Country Club in the coming week.

The Queen's Plate, the first jewel of Canada's Triple Crown of horse racing, has been run annually since 1860.

"Due to the postponement of the start of the 2020 thoroughbred season in response to the COVID-19 pandemic, we have already been discussing and evaluating the potential postponement of the Queen's Plate, the oldest continuously run horse race in North America," Woodbine said in a statement.

"Those discussions will be accelerated in light of this news and we will provide an update in the coming days."

The Canadian Open, first played in 1904 and only not held during the two world wars, is the third oldest continuously running tournament on the PGA Tour. It has been played at several courses across the country.

This year's edition is slated to be the 111th playing of the event.

"Together with the PGA Tour, we are assessing this recent development (of the Toronto event ban) along with other challenges posed by COVID-19 to determine the best course of action for the Canadian Open," RBC and Golf Canada said in a statement.

Because the Toronto event ban announced Tuesday does not include pro sports, the Maple Leafs and Raptors still could hypothetically play games at Scotiabank Arena, the Blue Jays could play at the Rogers Centre and Toronto FC and the Argonauts could play at BMO Field.

However, almost all major sports leagues and events around the world have been suspended, cancelled or postponed indefinitely because of the COVID-19 crisis.

Also, Ontario extended its state of emergency through April 14 on Monday. It prohibits events or gatherings of more than five people.

There also is an international travel ban in place, prohibiting anyone deemed non-essential from entering Canada. Almost all major sports events in Toronto include athletes from outside Canada.

When asked about BMO Field, a city-owned, Maple Leaf Sports and Entertainment-operated facility that is home to Toronto FC of Major League Soccer and the CFL's Argonauts, and Lamport Stadium, home to rugby league's Wolfpack, a city spokesman said the mass gathering prohibition still applies.

Major League Soccer has suspended its season, with a targeted -- although not cast in stone -- return date of May 10.

Major League Rugby has already cancelled its season, shelving the Toronto Arrows until next year. The Arrows play some home games at Lamport Stadium.

The Wolfpack are currently based in England, where rugby league play has been suspended. The home portion of their schedule at Lamport Stadium wasn't to start until April 18.

The transatlantic rugby league club says it is looking at two options: Rescheduling all Toronto home games later in the year once the season resumes, or looking at alternative venues as needed in the United Kingdom.

The NHL, NBA and Major League Baseball have all suspended their seasons and the CFL has postponed training camps.

In its release, the city encourages event organizers to follow physical distancing guidelines.

This report by The Canadian Press was first published March 31, 2020.