Province pledges $20M for youth programs in wake of shooting 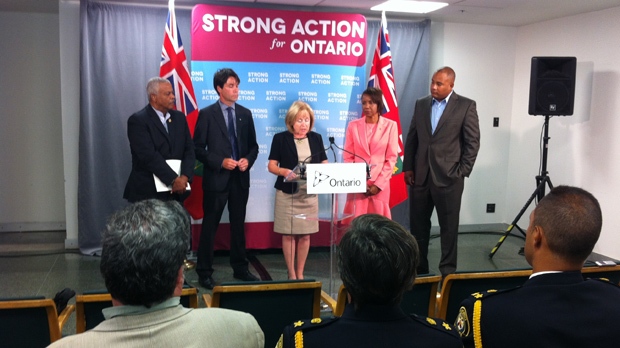 TORONTO -- Ontario is bolstering crime prevention programs with a focus on youth -- to the tune of $20 million -- in an effort to get guns off the streets by trying to prevent kids from turning to crime in the first place.

A plan to expand summer job programs and add more youth outreach workers was announced Tuesday. The multi-million-dollar investment comes on the heels of two deadly public shootings this summer in Toronto.

Community Safety Minister Madeleine Meilleur said the government will be taking proceeds of crime and funnelling that money into crime prevention programs in priority communities in the province.

"Crime prevention is only one part of the youth action plan," she said at the announcement Wednesday. "But it is a critical part because it stops bad choices before they are made."

A shooting at a barbecue in July in Toronto's east end killed two people and injured more than 20 others, sparking concerns over gunplay in public places.

In June, a shooter opened fire at a crowded food court inside Toronto's Eaton Centre mall, killing one person on the scene, and wounding a second victim who died in hospital days later.

The incidents galvanized federal, provincial and municipal leaders, who have vowed to do what they can to stop gun violence.

Children and Youth Services Minister Eric Hoskins said 35 new youth outreach workers will be added across the province, 20 of them in the Toronto area alone.

Rewards of tips to Crime Stoppers could also be boosted to between $1,600 and $2,000 when they lead to guns being taken off the streets, he announced.

"These are some of the immediate actions we're taking," Hoskins said. "The (2008) report on the roots of youth violence remains our foundation and our blueprint."

The Liberal government have already announced it will make funding permanent for initiatives such as the Toronto Anti-Violence Intervention Strategy (TAVIS) that target illegal gang, drug and weapons in priority communities. Currently the TAVIS program and its provincial counterpart known as PAVIS have been budgeted only until March.

The provincial government also called on Ottawa to add federal prosecutors to initiatives focusing on guns.

"It takes a village to raise a child," said Meilleur. "In my village, everybody's around the table, including the federal government."

New Democrat Jagmeet Singh said he was encouraged by the youth action plan announcement, but cautioned against delays.

"We must ensure these programs are implemented quickly," said Singh. "We don't want to see another report sit on the shelf, so we'll be paying close attention to these initiatives."

Progressive Conservative leader Tim Hudak later showed skepticism of the Liberal plan, saying it's important to measure what impacts the types of programs have.

"If you actually want to get at gang violence, put the bad guys behind bars, take the guns away from them," said Hudak.