TORONTO -- Two groups of opposing protesters are clashing in Toronto’s affluent Midtown neighbourhood over the use of temporary shelters in the area.

The demonstrators started protesting at around 10 a.m. near Northern Secondary School at Mount Pleasant Road and Broadway Avenue on Saturday.

A temporary housing program recently opened at the Roehampton Hotel and there is an interim housing site located at 55/65 Broadway Avenue, which is set to close at the end of the month.

One group of residents is concerned about what it said has been an increase in crime in the Yonge and Eglinton area since the shelters were created in late April, to provide more locations for clients to socially distance during the COVID-19 pandemic. 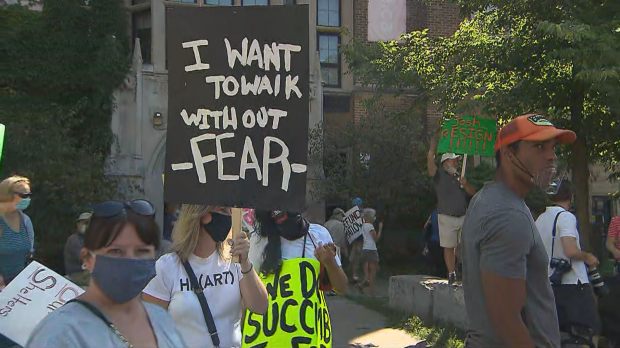 The other group is against these concerns and said the shelters and its clients are welcome in the neighbourhood.

The protests come after a city employee was stabbed at the Broadway housing site last week.

Residents who are concerned about the shelters said more needs to be done to ensure safety concerns are addressed and that shelter residents are properly supported.

Nick Avramis lives in the area and said he wants the alleged criminals removed from the shelters.

“We are all in favour of helping [the] homeless and those who are vulnerable,” Avramis said. “There [has] always been homeless people at Yonge and Eglinton for as long as I lived here and there’s never been any problems. But this shelter has an element of criminality in them that must be removed.” 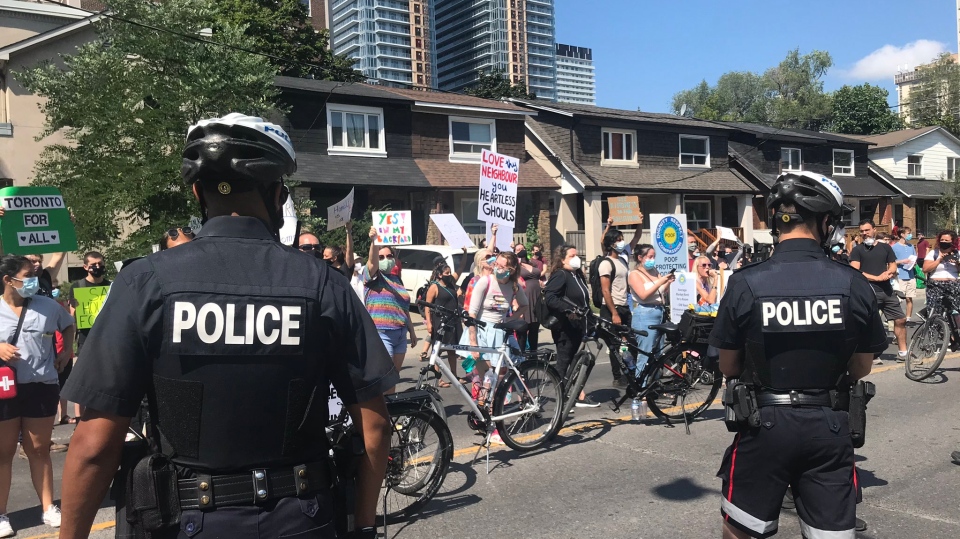 Kayla Bailey, who is opposed to the protests against the shelters, said she is embarrassed to see so much hatred on the streets.

“They live in a high-density neighbourhood but they’re still expecting it to be the same affluent neighbourhood that brought them all here in the 90’s like my parents. But they’re bigots, they’re classists and they have no respect,” Bailey said.

Mayor John Tory released a statement today and said he has been talking with Midtown residents over the last few weeks to hear their concerns.

"I want people to know that the message has been received and that I am doing everything possible to address safety concerns in particular," Tory said.

"I will not for one moment let up on my efforts as Mayor to BOTH care for our most vulnerable populations AND maintain safe, secure neighbourhoods. We will work together to achieve both."

In a press release, the city said it acknowledges residents’ concerns and have taken steps to address them, including a third-floor outdoor space at the Roehampton site that will open next week for clients, 33 new security cameras, enhanced 24/7 mobile patrols and four security guards at the Roehampton site.

“The city has a responsibility to address and respond to safety concerns in any neighbourhood, while also supporting homeless individuals in our city with dignity and care,” city staff said in the press release.

“The city is working hard to integrate the Roehampton temporary housing program into the community in response to COVID-19.” 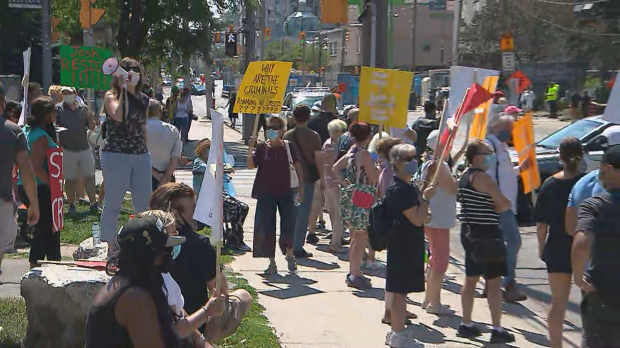 Kathleen Wynne, the former Ontario premier and current member of provincial parliament for Don Valley West, attended the rally and told CP24 that she hopes the protest doesn’t become a fight against social classes.

“I really hope it doesn’t become an adversarial homeless against non-homeless, you know poverty against [the] affluent, that’s not what this is about,” Wynne said. “This is about community safety and making sure that the city puts the resources in.”

Councillor for Toronto-St. Paul’s, Josh Matlow, tweeted on Saturday that residents’ concerns must and are being heard by the city.

“Our community’s support for our city’s homeless is unwavering,” Matlow tweeted. “We expect the city and province to provide supports to ensure the safety of shelter clients and the community. Working with the mayor and city staff, I remain focused on a collaborative, effective and compassionate approach.”

Our community’s support for our city’s homeless is unwavering. We expect the city & province to provide supports to ensure the safety of shelter clients & the community. Working with the mayor & city staff, I remain focused on a collaborative, effective & compassionate approach.

Member of Parliament for Don Valley West, Rob Oliphant, also weighed in on Twitter and said he does “not like the way” the city went about creating the temporary shelters in the area.

“The city acted with no consultation, inadequate community security measures and few resources for those in the shelters. Not good enough,” Oliphant tweeted.

“The city bungled this, but demonstrations, especially during a pandemic, are not the best way to change public policy.”

City staff have planned a virtual information session for Aug. 19 to share plans for the Roehampton temporary housing program, community safety enhancements and to hear from residents in the community.