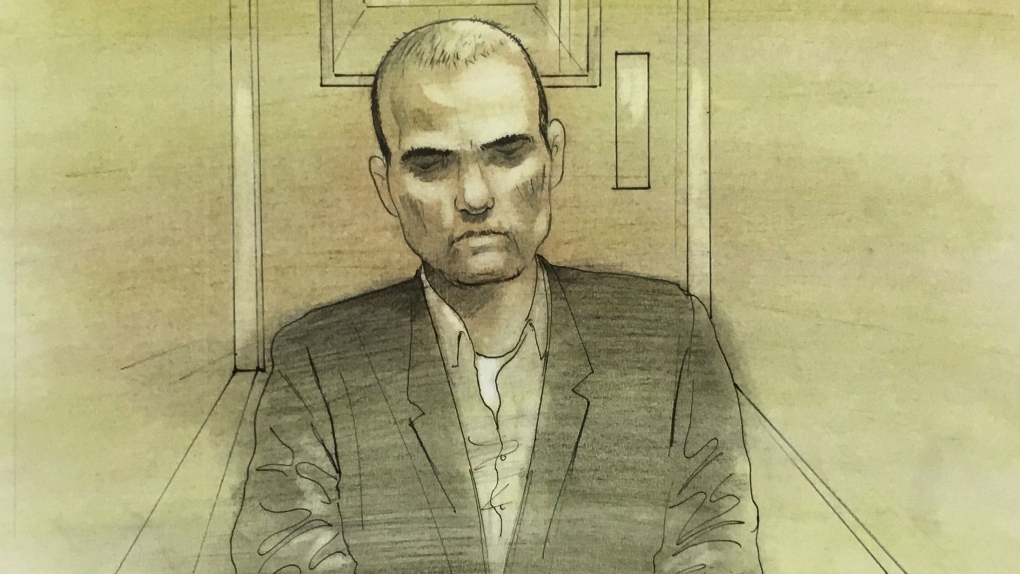 Alek Minassian is seen during his murder trial being held via videoconference on Nov. 10, 2020. (John Mantha)

TORONTO -- The six-week trial for the man who killed 10 people by deliberately driving a van onto a busy Toronto sidewalk is nearing an end as the final witness finished his testimony Tuesday.

Dr. Scott Woodside, a forensic psychiatrist and star witness for the prosecution, emphasized Alek Minassian knew what he did was morally wrong.

Court has heard Minassian planned to attack a different part of Toronto -- the exact location is under a publication ban -- designed to maximize deaths.

But Minassian changed his mind at the last second on April 23, 2018, when he saw an opportunity to drive into a crowd of people in the city's north end.

Woodside said Minassian's split-second decision to change his plan did not mean he didn't know what he was doing was morally wrong, as his defence team maintains.

"He's been thinking about this for a very, very long time, had been planning this for 20 odd days prior to undertaking it and had set his plan in motion. He had years, in essence, to contemplate

committing a mass murder and finally had taken the steps to actually act on that."

Court has heard that Minassian wanted a high "kill count" to set a world record for mass murders, which he has been obsessed with for years. He hoped for 100 deaths, but was "satisfied" with 10.

Minassian has pleaded not guilty to 10 counts of first-degree murder and 16 of attempted murder.

The defence argues the 28-year-old from Richmond Hill, Ont., is not criminally responsible for his actions due to his autism spectrum disorder.

Minassian's state of mind at the time is the sole issue at trial after admitting to planning and carrying out the attack.

The central question in the case is whether Minassian knew it was morally wrong to kill.

Woodside, the Crown's key witness, said Minassian told him and other mental health experts that he knew his actions would be viewed as "despicable" by the public and his victims and their families.

Minassian wanted to become infamous, Woodside said, which is a "calculation" on his part to commit the worst possible act in society: killing people.

That implies a clear knowledge of knowing what he did was morally wrong.

The defence, however, said Minassian lacked empathy due to his autism spectrum disorder.

Dr. Alexander Westphal, a U.S.-based psychiatrist who specializes in autism and the star witness for the defence, took the virtual stand for seven consecutive days, including more than four days of gruelling and at times tense cross-examination by lead Crown attorney Joe Callaghan.

Westphal said Minassian never developed moral reasoning because he lacked empathy, which was due to his autism spectrum disorder.

Minassian was, therefore, unable to make a rational choice that day he decided to attack, Westphal said.

He testified Minassian lacked the so-called "theory of mind," or the ability to take the perspective of others and to understand they have different thoughts and feelings than his own.

At one point during Westphal's testimony, Minassian fell asleep for several minutes.

Minassian watched the proceedings from a small room -- when he stretched his arms, they nearly touched the walls -- at the Toronto South Detention Centre. He wore a black suit over a white button-down shirt, sipped Vitamin Water frequently and read from a small red bible during breaks.

As the defence opted for a not-criminally-responsible defence, the onus shifts away from the prosecution to prove its case beyond reasonable doubt.

The defence must prove beyond a balance of probabilities that it's more likely than not that Minassian had a mental disorder that impacted his actions to the extent that he didn't understand what he was doing was wrong.

Justice Anne Molloy, presiding over the trial without a jury, said last week she believes the defence passed the first legal test that autism spectrum disorder qualifies as a mental disorder.

But she also noted Minassian fails the next part of the test because he knows it is legally wrong to kill people.

That leaves the final branch of the test, whether he knew at the time it was legally wrong to kill 10 people and try to kill 16 others.

This report by The Canadian Press was first published Dec. 15, 2020.