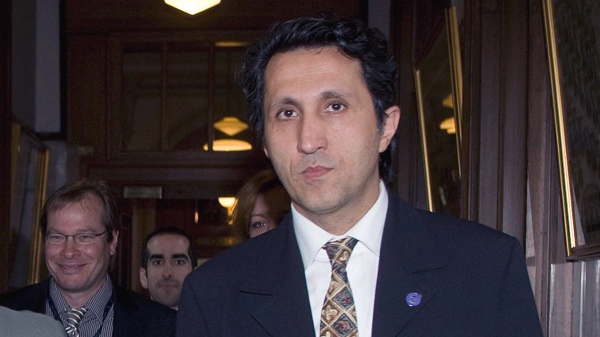 Quebec Solidaire leader Amir Khadir walks to a news conference where they announced a common front on the Caisse de Depot, Friday, May 29, 2009 at the Quebec legislature. (Jacques Boissinot / THE CANADIAN PRESS)

TORONTO - A prominent activist charged following last month's G20 protests nodded his head in agreement to conditions of his bail Monday in the Ontario Court of Justice.

Not that Jaggi Singh said he believed they were fair conditions.

"It's necessary for my release to agree to those conditions," Singh said later outside the courthouse.

"They are conditions that I would like to challenge," he said. "You know, I'm a grown adult, but now I'm organizing my life with other people who are like my parents."

He was referring to a condition that placed him under house arrest and under supervision of his three sureties.

The Montreal resident turned himself in to police on July 6, after an arrest warrant was issued for him following G20 demonstrations in late June in Toronto.

He was granted release on $85,000 bail from three sureties, including Amir Khadir, a politician with the Quebec Solidaire party.

"I make this gesture out of a sense of duty to help my fellow Quebecers," Khadir said in a statement.

"The Quebec government has provided no assistance to its citizens who were targeted and arrested in Toronto, in some cases simply because they come from Quebec ... It is therefore up to us to fulfil this duty of coming to their aid."

Apart from being under house arrest, Singh must adhere to several other conditions, including travelling only for emergency medical care or legal affairs, no use of communication devices and having no contact with co-accused or members of the Southern Ontario Anarchist Resistance.

One condition troubled him most, that of not demonstrating or participating in any protest. He said that condition is humiliating.

"Organizing and participating in social movements and protests is a huge part of who I am," he said, noting he had planned to participate in a demonstration in Montreal in early August.

"The bail conditions that we agreed to are very restrictive," he said outside court.

"But Mr. Singh agreed to those conditions because he wants to be out of custody, otherwise he would remain in custody."

Patrick Cadorette was also freed on bail Monday and will be subject to similar conditions as Singh. He is permitted to use a computer or laptop only for work or employment purposes under the supervision of his sureties.

About 20 people have been identified as part of a police investigation into activities of people planning violent G20 action.

They are facing charges including mischief, assaulting police officers, conspiracy to assault police officers and charges relating to property damage.

Six people have concluded their bail hearings and five of them have been released on bail.

Leila Pourtavaf, a friend of Singh and fellow activist, criticized the bail conditions outside court.

"I think that there is a climate of criminalization of community organizers and activists," she said.

"I think the conditions are very exaggerated," Pourtavaf said. "Being under house arrest is just like an attempt to prevent community organizers from doing their day-to-day work."

Singh is a spokesman for the Montreal branch of the immigrant rights group No One is Illegal, and has been a vocal presence at anti-capitalist protests for close to a decade.

More than 1,000 people were arrested during the G20 protests, which saw vandals smash windows and burn police cars.

Four alleged anarchists accused of having organizing roles are among those seeking bail.

Leah Henderson, Amanda Hiscocks, Peter Hopperton and Alex Hundert are alleged to be members of the Southern Ontario Anarchist Resistance, or SOAR.

Hopperton is scheduled to be in court Tuesday. Hundert and Henderson appear July 15, while Hiscocks is set to appear July 16.

Singh and Cadorette are scheduled to be back in court Aug. 23.