Pro-choice rally held at U.S. consulate in Toronto in wake of Roe vs. Wade overturn

Pro-choice rally held at U.S. consulate in Toronto in wake of Roe vs. Wade overturn 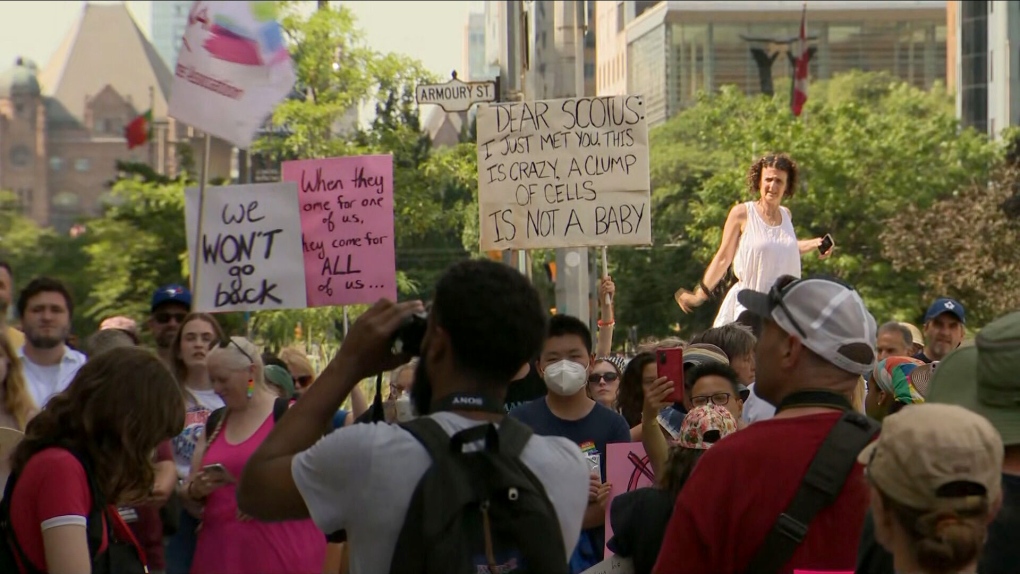 Protesters take part in a pro-choice rally outside the U.S. consulate in downtown Toronto Saturday June 25, 2022.

Dozens of people gathered outside the U.S. consulate in downtown Toronto Saturday to protest a landmark decision by the United States Supreme Court to overturn constitutional protection for abortion rights.

The decision is expected to lead to abortion bans in roughly half of U.S. states.

Speaking with CP24 outside the consulate, the chair of Democrats Abroad Canada said she’s worried about what the move means for women’s health and freedoms.

She said she greeted the decision Friday with anger and fear but that has since turned to action.

“We’re mobilizing, we’re registering voters, we’re finding those Americans that are here,” Erin Kotecki Vest said, pointing out that there are more than half a million Americans living in Canada who are eligible to vote in the U.S.

She said the primary goal of the protest is to raise awareness about the decision.

“We need to get more people aware of what’s going on and to get those Americans that are here in Canada registered to vote because that’s the only thing that’s going to change this,” Kotecki Vest said. “Canadians voting and Americans voting, that’s the number one thing to do.”

She said while Canadians and Americans living here tend to feel insulated from the abortion debate south of the border, people should not take their freedoms for granted.

“One of the reasons we love living in Canada so much is that we think we don’t have to fear what’s happening south of the border, that we can kind of skirt that a little. But as you’ve seen it’s starting to creep up,” she said.