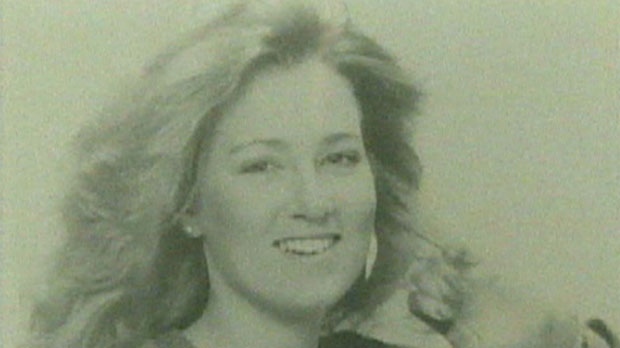 Erin Gilmour is pictured in this police handout photo. Gilmour was sexually assaulted and stabbed to death in her Yorkville apartment in 1983.

TORONTO -- A man stalked the streets of Toronto, a 45-year-old mother of four in his sights.

He mapped her movements through her downtown neighbourhood, plotted his attack, then savagely struck one August night in 1983. When he was done, Susan Tice lay sexually assaulted, stabbed and breathing her last in her own bedroom.

Four months later, the scene played out again, this time during the Christmas rush in the heart of Yorkville -- one of the city's most posh neighbourhoods. The victim, 22-year-old aspiring fashion designer Erin Gilmour, suffered the same horrific fate.

That's what detectives at the Toronto cold case unit believe happened. In both cases, they say the assailants left behind traces of his DNA, captured by police.

Seventeen years later in 2000, DNA technology enabled investigators to confirm what they suspected all along -- both women were killed by the same man. It seemed a resolution was imminent now that a central DNA databank was taking shape in Canada.

But 16 years after that key clue, the cases remain cold.

For police, the lack of closure on the Tice and Gilmour murders stands as a striking example of why Canada is a particularly difficult place in which to solve cold cases.

Former Toronto police officer Dave Perry said Canadian laws governing DNA collection forbid police from entering a suspect's sample in the databank at the time of arrest, in marked contrast to countries like the United States and the United Kingdom.

This omission, he fears, has allowed a killer to walk free for decades.

"He's probably done something in his life that, had we been doing this, we'd have his DNA and those two murders would be solved," Perry said.

Criminologists and police officers feel there are several factors conspiring to make Canada an inhospitable environment for cold case detectives. Aside from stringent DNA privacy laws, they cite rigorous documentation standards that add layers of red tape to complex investigations, lack of financial and laboratory resources, and even a policing culture that doesn't always prioritize historic cases.

"Canada's cold case investigative protocols are unclear, even opaque, in part because there is no standardized system for defining a cold case much less on how to investigate them," said Western University criminologist and former police officer Michael Arntfield.

This stands in stark contrast to other western countries, he said, which have established protocols, loosened regulations and provided the resources necessary to solve historic murders.

Arntfield believes police forces across Canada could learn much from the Toronto cold case unit.

Describing the force as "the best of its kind" in Canada, Arntfield said it set itself apart from its counterparts by establishing a dedicated unit with a stable core of experienced detectives.

The consistent presence of seasoned investigators means information about the case is less likely to fall through the cracks, either for the officers themselves or the families at the heart of the cases, he said.

Det. Sgt. Brian Borg, who once led Toronto's cold case unit, was one of the investigators who maintained the management of individual cases for years at a time.

That focus, he said, has helped the squad solve a number of cases. But some of the ones that remain on the books are likely to haunt him well after his retirement later this year.

Borg specifically cites the 2008 death of Shawn McLean, who was gunned down seemingly at random while walking home from the shopping mall he frequented nearly every day.

Investigative efforts in that case were stymied by traditional challenges such as lack of witnesses and physical evidence, but Borg said cases are often thwarted by more systemic obstacles.

One barrier is lack of resources to accomplish forensic testing. Only Ontario and Quebec have dedicated crime labs, he said, adding the RCMP runs a handful of other facilities across the country.

Major American police services, by contrast, can occasionally afford to set up their own labs thanks to lucrative grants available to them through the U.S. Department of Justice.

"Essentially, for Canadian law enforcement to do this kind of work, the resources and the money to do this basically come out of their own pockets," he said.

Borg said the DNA databank is an invaluable resource, but it falls short of its full potential due to Canadian privacy laws that dictate DNA samples are only mandatory for offenders convicted of a specific list of crimes.

A deeper pool of profiles in the databank, he said, would lead to more cold case closures and may have helped police solve the Tice and Gilmour murders among many others.

The DNA that turned up at those crime scenes has never surfaced in the national databank, leaving police unable to put a name to the profile.

Borg said taking samples at the time of arrest could eliminate the problem.

"There's no correlation between what an offender is convicted of and what they may have been found to have committed," he said, adding someone could be found guilty of a domestic assault and only then be implicated in a stranger-on-stranger sex assault."

The argument doesn't hold water for the Office of the Privacy Commissioner, which views DNA as highly sensitive personal data capable of revealing "almost all facets of a person's physical and mental characteristics."

Office spokeswoman Tobi Cohen said the mere inclusion in a databank constitutes a privacy breach in theory. While acknowledging that such a databank should exist, she said the office is opposed to expanding the DNA Identification Act.

"The mere suspicion of having committed a crime, which is all authorities have when they arrest somebody, does not justify the retention of DNA in a DNA databank," Cohen said in a statement.

"Not only does it threaten the presumption of innocence, it also has a disproportionate impact on the privacy and civil rights of ethnic and racial minorities who tend to be overrepresented in terms of arrest and incarceration rates."

Perry, who is now a private investigator, sides with Borg, saying not only privacy laws but case management protocols make life harder for cold case investigators. He cites the example of affidavits required to get a judge to issue a search warrant on a suspect.

While a two or three-page document prepared by a single investigator suffices for a U.S. judge, Perry said an entire team of Canadian officers is often required to compile enough documents to fill multiple four-inch binders.

He called Canada's approach "ridiculous," lamenting that adhering to such bureaucratic processes leaves suspects with ample time to destroy evidence or even reoffend.

The Canadian system needs to find a way to strike a balance between the privacy of those who don't commit crimes and the needs of those who work to solve them, he said.

"Every time you add an hour, let alone a day, to an investigation, that's multiplied by a hundred times because you've got so many people working on it and everybody's hitting the same dead ends," Perry said. "There's got to be a simpler way."