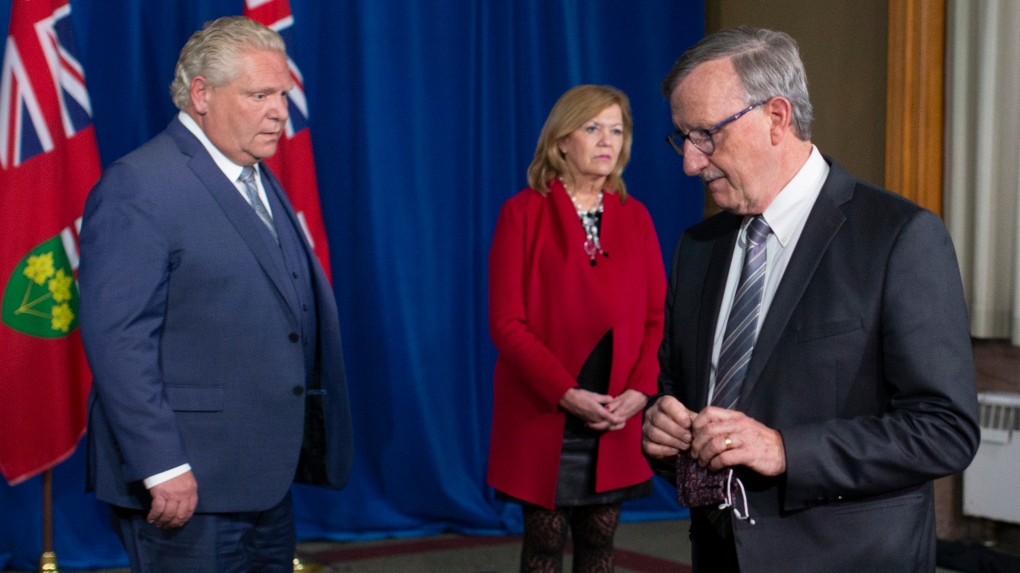 Dr. David Williams, Ontario's chief medical officer of health, left, turns from the microphone as Ontario Premier Doug Ford and Health Minister Christine Elliott look on during a briefing, as the Provincial Government announce a series of measures to combat the spread of COVID-19, In Toronto, Friday, Nov, 13, 2020. THE CANADIAN PRESS/Chris Young

TORONTO -- Premier Doug Ford is sidestepping questions on whether his government will publicly release the advice that it receives from its various COVID-19 advisory tables, telling reporters that Ontarians should just tune into his regular media briefings instead.

Ford made the comment during one of those briefings on Monday afternoon, just hours after the city’s Medical Officer of Health Dr. Eileen de Villa revealed that Toronto Public Health staff had to sign non-disclosure agreements to participate in discussions held by the provincial health measures table.

“I don’t know of any other government across Canada that has been more transparent. It has been unprecedented transparency,” Ford said when asked whether he would make the advice public. “What I know is people find out (the advice) and they find out at one o clock every single day.”

During its meeting on Monday morning, the Toronto Board of Health voted unamiously to ask the Ford government to make the advice from the groups advising Chief Medical Officer of Health Dr. David Williams and Premier Doug Ford public with Chair Joe Cressy noting that “full transparency and accountability are more important than ever in order to maintain public confidence and public trust.”

Ford did not commit to that when pressed by reporters, though. Instead, he vowed to “continue being transparent” through daily 30-minute press conferences and the regular release of data that is informing the decisions made by his government.

“I am the only elected official in the entire country that comes out here every single day, never missed a day unless it is a holiday, and takes questions and tough questions too,” Ford said. “So I don’t shy away from it at all and I am going to continue coming out here everyday informing the people of Ontario.”

Ford has consistently said that he will defer to the advice of Williams and members of Ontario’s public health measures table in determining what restrictions to impose.

The advice, however, has remained confidential, leaving many Ontarians in the dark about the metrics and other indicators that are guiding Ford’s decision-making process.

Last week, the Ford government faced criticism after CTV News Toronto obtained confidential provincial documents which suggested that thresholds for the various categories in its tiered framework for COVID-19 restrictions were raised significantly beyond what was first recommended.

At the time Ford said that the framework “was given to us through Dr. Williams and his team” but he nonetheless changed course one day later, lowering the indicators for moving regions into each of the colour-coded tiers.

On Monday, he noted that Williams did “sign off” on the lower indicators initially but that changes were ultimately made following the release of new modelling which warned that Ontario could see 6,500 daily cases by December.

“I will continue being transparent on anything I know,” he promised.