QUEEN'S PARK -- Ontario Premier Doug Ford is creating a new council to focus on the intersection of federal and provincial issues, as his government looks to extract more investment from the new minority Liberal parliament in Ottawa.

Congratulations to the new members of @JustinTrudeau’s cabinet. We at Queen’s Park are looking forward to working with our federal counterparts to build a stronger, more prosperous Ontario and Canada. #cdnpoli #onpoli

"We are ready to work with the new federal cabinet to get shovels in the ground quickly on important projects, increase health care funding and create an environment where businesses and job creators can thrive,” Ford said in a statement. 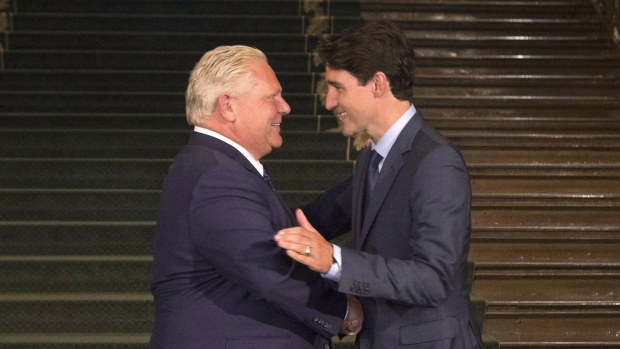 Today I announced I will be leading a council on Provincial-Federal relations. Our ministers and I will work with the federal government to deliver on key priorities, including infrastructure, health care and economic growth. https://t.co/5nZMoFtiAH#cdnpoli #onpoli pic.twitter.com/iCxTwFhII5

The government said the goal was to coordinate the “engagement strategy” with the federal government especially on important projects such as Ford’s $28.5-billion Ontario Line transit system.

Transit and infrastructure projects are among the top priorities, the government said, as well as increased funding for healthcare.