A CTV News investigation has revealed that a $100 million transmission line intended to bring electricity into Ontario from the United States is not delivering any energy. With the project blocked by the Caledonia land claim dispute, the line is costing taxpayers millions in interest instead.

The 76-kilometre line was built to bring electricity into Ontario from Niagara Falls, New York but because of a Six Nations land dispute in Caledonia, Hydro One has been unable to complete the last 5 kilometres of the power line.

And that’s costing Ontarians, when it comes to their monthly hydro bill.

Since 2007, Hydro One has had permission from the provincial government to bill taxpayers for its interest payments on the $100 million capital cost to build the powerline. To date, taxpayers have paid nearly $50 million in interest alone, for a powerline that has never transmitted any electricity. 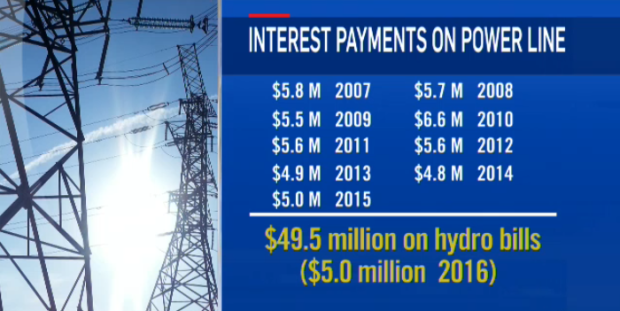 “It's one of the costs of respecting First Nations rights. It's a dispute between two First Nations that needs to be resolved by the federal government. It's unfortunate,” Chiarelli said.

But Chiarelli also says that local native groups in Caledonia can’t agree among themselves whether or not to allow the power lines to be completed.

The powerline was designed to bring 800 megawatts worth of electricity into southern Ontario. This is equivalent to the amount of power that Ontario gets from one of the nuclear reactors at the Darlington Nuclear Station.

The provincial government says that Ontario doesn’t need the electricity right away because the recession has slowed manufacturing, which has, in turn, decreased the demand for power.

Hydro One said in a statement that they “have respected the request by the community to stop work. However, they remain hopeful that when outstanding issues are resolved we can proceed and complete construction of the line.”