A section of Eglinton Avenue West near Keele Street has been closed to traffic after a crew working on an underground tunnel discovered a possible sinkhole beneath the road.

The potential sinkhole was discovered approximately 20 metres under the road’s surface, where crews are building a tunnel for the new crosstown light rail transit system.

A worker noticed water and soil leaking into a cross-tunnel, a smaller space dug between the main LRT tunnels. The leak was contained, but the road was closed between Richardson Avenue and Glenhaven Street as a precaution.

Investigators are on scene conducting soil tests and examining the area to determine whether there is a threat to the structural integrity of the road.

A Metrolinx spokesperson told CTV Toronto that the area was weakened, and will need to be reinforced from the surface and underground.

Metrolinx's Anne Marie Aikins said the closure is expected to continue through the weekend. 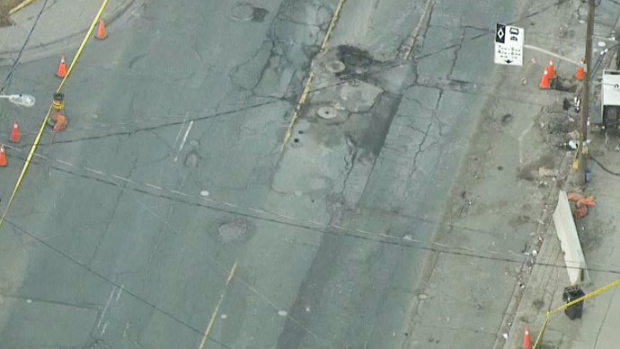