Portion of TTC’s Line 1 shutting down again this weekend 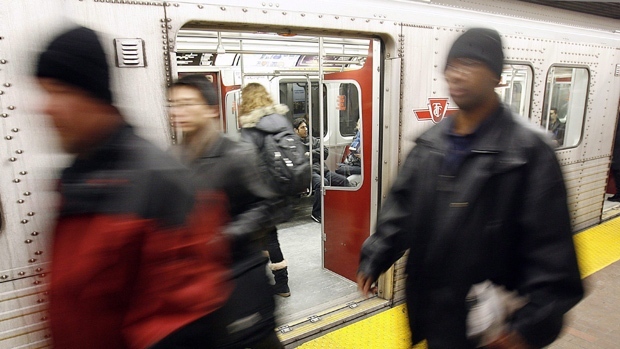 Todd, a TTC operator for more than 20 years, decided to wear a medical mask to work yesterday in an effort to reduce his exposure to pollution. (The Canadian Press)

TORONTO -- A portion of the TTC’s Line 1 will be closed Saturday and Sunday for the second weekend in a row.

There will be no service between Sheppard-Yonge and St. Clair stations in order to allow Metrolinx crews to continue work on the Eglinton Crosstown LRT.

Replacement shuttle buses will run along Yonge Street, stopping at each station along the route, and staff will be on hand to direct customers to shuttle boarding and offloading locations, the TTC said.

In addition to the shuttles, the 97 Yonge bus and the University-Spadina side of Line 1 will be available as alternatives during the closure, the transit agency said.

The TTC said that Davisville Station will be closed, but all bus routes will continue to operate from the station as usual.

At York Mills Station, the Old York Mills Road entrance will be closed. The TTC is advising customers to use the other four station entrances located in the York Mills Centre, Yonge Corporate Centre and at the corner of Yonge St. and Wilson Ave.

All other stations will remain open as usual for fare sales and access to surface routes and Line 4.

The TTC said that Wheel-Trans will be available upon request from any station throughout the closure.

The agency said that while regular subway maintenance occurs at the end of each night of service, weekend closures are required to complete “critical infrastructure” upgrades.

Line 1 is scheduled to close between Lawrence and St. Clair stations the weekend of Jan. 25 and Jan. 26.