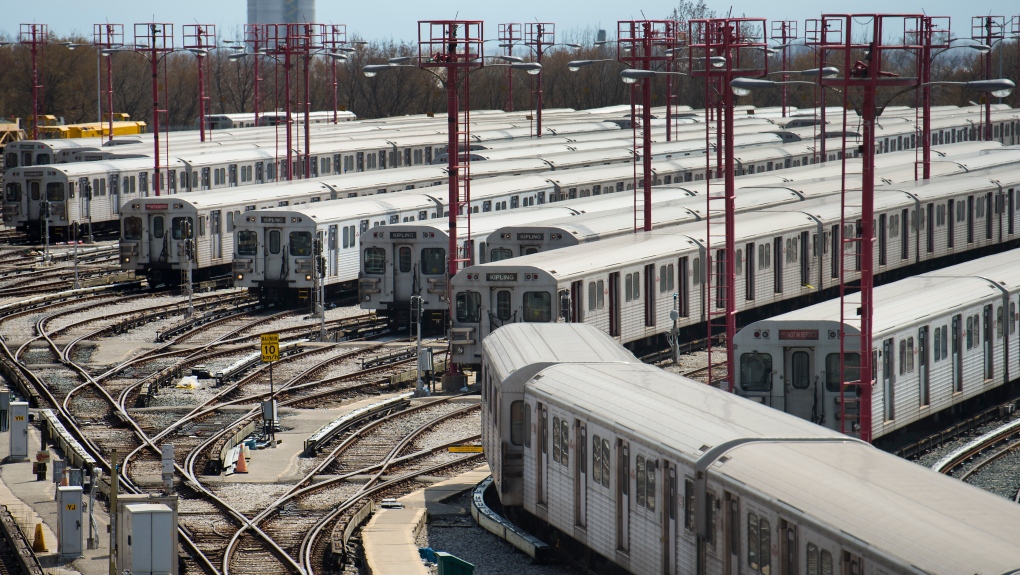 Subway trains line up in a TTC yard in Toronto on Thursday, April 23, 2020. TTC officials have said that they will lay off 1,200 workers temporarily due to the COVID-19 pandemic. THE CANADIAN PRESS/Nathan Denette

TORONTO -- A portion of the Line 1 subway will be closed down for signal work for nearly 10 days as the TTC works to accelerate the installation of a new signal system during a time when ridership is down significantly due to the COVID-19 pandemic.

The TTC will be closing the portion of Line 1 between Finch and Sheppard-Yonge stations as of 11 p.m. on Dec. 4.

The closure will then be extended to St. Clair Station during the weekend of Dec. 12-13.

The TTC says that full service on the line won’t resume until 6 a.m. on Dec. 14.

"We are taking this opportunity to make the best of our reduced ridership and complete imperative state-of-good-repair work in the subway system while inconveniencing as few customers as possible," TTC CEO Rick Leary said in a press release. "This work will put our crews ahead several years in their progress of modernizing the system and providing the best possible service for our customers."

The TTC has typically opted for weekend or early closures on weeknights to accommodate work on the new signal system but has decided to authorize a longer closure, so that it can take advantage of ridership levels that are still down 50 per cent compared to where they were pre-pandemic.

The TTC says that the work slated for Line 1 will allow it to avoid more than two years of early nightly closures.

"I know these closures are frustrating, but the TTC is doing this work now during the pandemic, while subway ridership is dramatically reduced, to save years in the long run," Mayor John Tory said in the release. "I want to thank our TTC workers for doing all they can to accelerate the installation of the ATC signal system. These upgrades will help provide a more reliable subway ride for more riders."

The TTC says that shuttle buses will be running during the closure and that customers can expect one about every minute “during peak periods.”

North York Centre Station will be closed from 11 p.m. on Dec. 4 until 6 a.m. on Dec. 14 but all other stations will remain open for fare sales and connection to surface routes.