TORONTO -- Poor weather conditions have delayed a recovery effort for a nine-year-old boy who fell through the ice on Lake Erie Saturday afternoon.

Officers with the Ontario Provincial Police said they were called to the area of Peacock Point, located approximately 50 kilometres south of Hamilton, at around 4:30 p.m. 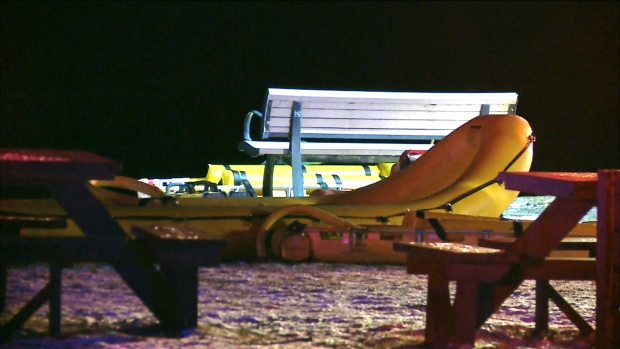 Const. Rodney LeClair said a nine-year-old boy and an eight-year-old boy were sitting on a patch of ice about 25 feet from the shoreline “when a wave came up and swept the two males into the water.”

A 10-year-old girl, who was with the two boys, “ran up to the roadway and flagged down a passerby, a male and a female, who then ran down to the water,” LeClair said.

“They were able to rescue the eight-year-old, however the nine-year-old did not resurface and that is the male we are searching for,” the constable said.

LeClair said the girl is the sister of the missing nine-year-old boy.

Search efforts came to an end at sundown on Saturday and were expected to resume on Sunday morning but poor weather conditions have delayed just that.

“Our underwater search and recovery units at the scene, they are assessing the situation, whether they will be going into the water this morning,” LeClair told CP24 just after 9 a.m. on Sunday. “The conditions – it’s a bit windy out here, the water is a bit choppy so they are assessing that to see if it’s safe for them to go in the water.”

He said the search is considered to be a “recovery situation.”

On Sunday afternoon, the OPP said its Underwater Search and Recovery Unit were not able to enter the water due to dangerous conditions. They will return to the scene Monday morning to re-evaluate the conditions.