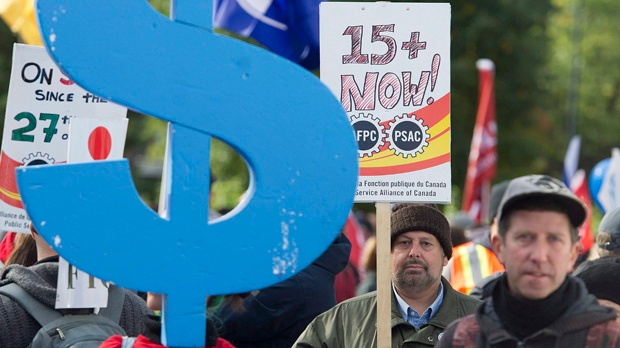 People gather in Montreal, Saturday, October 15, 2016, to demand a $15 minimum hourly working wage in the province of Quebec and across Canada. THE CANADIAN PRESS/Graham Hughes

It appears a strong majority of Torontonians support the idea of bumping up minimum wage to $15 per hour, a new poll finds.

The recently released Forum Research poll, which randomly sampled 840 Toronto voters, found that 70 per cent of respondents supported raising the minimum wage from $11.40 to $15. Only 25 per cent said they did not approve of the bump and five per cent said they didn’t know if they are in favour of it.

Respondents most likely to oppose the bump included people ages 35 to 44 (31 per cent), males (32 per cent), the most wealthy (31 per cent) and Progressive Conservative supporters (43 per cent).

“Torontonians are strongly supportive of an increase to the minimum wage in Ontario, with seven in ten saying they would support $15.00. An increase could make the rising cost of housing, already an issue for many Torontonians, that much easier to handle,” Lorne Bozinoff, president of Forum Research, wrote in his analysis accompanying the poll.

The poll, which was conducted on April 4 and April 5, is considered accurate within plus or minus three per cent, 19 times out of 20.