TORONTO -- Police have arrested six people following an investigation into a series of "highly coordinated" vehicle rallies in Peel and York regions, in which hundreds of participants took over intersections and parking lots to perform dangerous stunts and engage in street racing.

The investigation, dubbed "Project Drift," focussed on the activities of several groups that were involved in the organization and execution of the illegal vehicle rallies.

Police say that the groups would organize and promote the rallies, which were in turn attended by hundreds of people.

They say that while the rallies would start out in one location, attendees would often be directed by organizers to go to another location in another jurisdiction once police responded to the area.

Usually, that would mean travelling along the 400 series highways from Peel to York region, or vice versa. 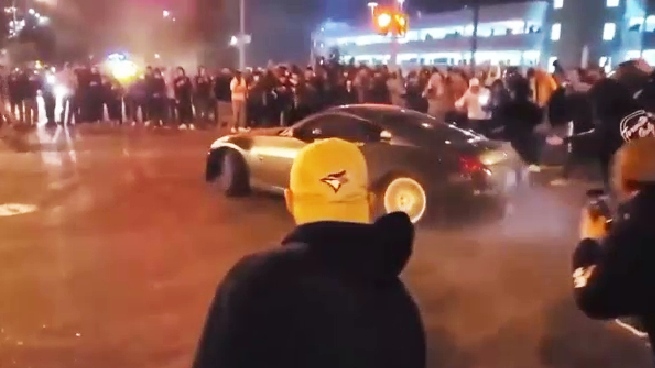 “This is more than just dangerous driving alone. It is actually organized drifting, street racing and taking over communities, intersections and streets to conduct dangerous, disruptive vehicle manoeuvers with a complete disregard for public safety,” Peel Regional Police Chief Nishan Duraiappah said during a news conference on Thursday morning.

“Those that choose to have a blatant disregard for community safety by engaging in these types of illegal activities need to be reminded of the consequences of their actions and that is why we are here united today. The community has had enough and so have we.”

Police forces across the Greater Toronto Area began to report an uptick in stunt driving and street racing once lockdown measures related to the COVID-19 pandemic began in March.

As part of that investigation they used a helicopter to observe and follow individuals engaging in illegal street racing and stunt driving and were able to lay 10 criminal charges and nearly 300 other charges under the Highway Traffic Act.

Investigators, however, soon realized that the illegal activity often spanned multiple jurisdictions so they began a joint investigation with the assistance of Peel Regional Police and Ontario Provincial Police.

On Thursday police released several video clips, in which drivers participating in the rallies could be seen doing high-speed donuts in parking lots or intersections, in some cases just barely missing individuals who were gathered in a circle to watch the illegal activity unfold. 4

Police say that those taken into custody as part of the investigation were all members of groups that promoted the rallies, including TO Takeovers, 416 Wolfpack and 905 Mexican Run.

Investigators say that while the individuals may have received some financial profits from merchandise sales and social media advertising, it appears as though they were mostly in it “for the clout.”

“The criminal acts we are speaking about involve groups of people who go to great lengths and develop a sophisticated plan to carry out dangerous racing, stunt driving and other activities on our roads. Our message to these groups is that the OPP and our policing partners also go to great lengths to develop a sophisticated plan to coordinate and carry out counter measures aimed at shutting them down,” OPP Deputy Commissioner Rose DiMarco said during Thursday’s news conference. “Project Drift is out way of saying that we will not tolerate this dangerous driving culture on our roads or in our communities.”