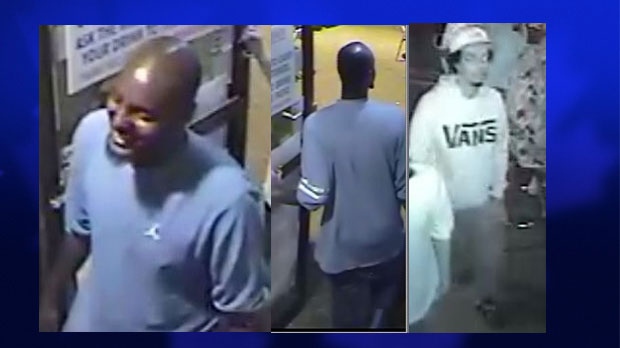 Police are asking the public to help find the missing clothing of two men killed in a shooting on Sept. 18 in the Jamestown area.

Security footage released on Wednesday reveals images of the two victims on the night of the shooting.

Police responded to a call in the Jamestown Crescent and John Garland Boulevard area after reports of gunshots at approximately 1:20 a.m on Sept. 18.

Police searched a nearby townhouse complex where the two victims were discovered.

Two men were pronounced dead at the scene with gunshot wounds.

Police identified the victims as Suleiman Ali, 26, of Toronto, and Warsame Ali, 26, of Vaughan. The two men are not related, said police.

The second victim, Suleiman Ali, was last seen wearing a light hooded sweatshirt with the word “VANS” in large letters across the front.

Both items of clothing are missing and police are seeking the public’s help in locating them.

Police described the suspect as black and around 5’10” tall. He was last seen fleeing the scene on foot while wearing a black hooded sweatshirt.