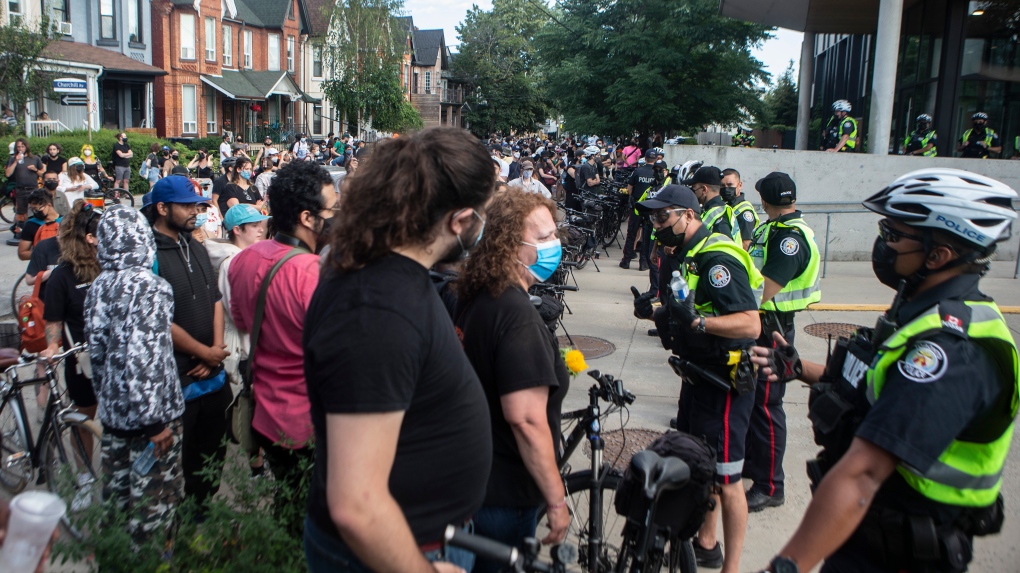 Encampment supporters gather outside Toronto Police's 14 Division to demand the release of colleagues who were detained as police and city workers cleared the Lamport Stadium Park homeless encampment in Toronto on Wednesday, July 21, 2021. THE CANADIAN PRESS/Chris Young

TORONTO -- Police have arrested three people in connection with a violent protest that took place outside 14 Division following the clearing of a homeless encampment earlier this summer.

On the morning of July 21 police officers and city crews attended the encampment at Lamport Stadium near King and Dufferin streets to enforce an earlier trespassing notice.

But they were met by a crowd of protesters who linked arms around several makeshift structures and refused to move aside.

Clashes eventually broke out between police and some of the protesters, leading to the arrest of more than two dozen people.

A few hours later a large crowd of protesters then gathered outside nearby 14 Division to demand the release of those individuals.

That protest started out peacefully but eventually grew hostile as well.

Several arrests were made at the time and on Thursday police confirmed that another three people have since been taken into custody, including two who are charged with assault with a weapon. 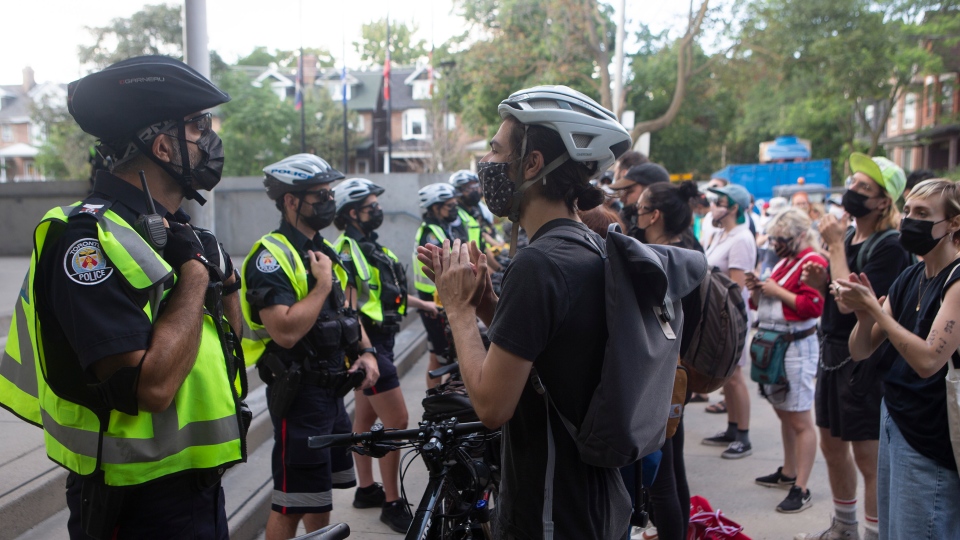 “Everyone has the right to peacefully and lawfully protest and our officers monitored the crowd and made active attempts to engage with them to keep the peace. Unfortunately, the crowd grew larger through the hours and more hostile and our officers were both assaulted and obstructed in the lawful execution of their duties,” Supt. Domenic Sinopoli said in a video appeal posted to YouTube. “Let me be clear: throwing projectiles at police officers, such as soup cans, or obstructing them is unacceptable, is a crime and will not be tolerated.”

Several demonstrations grew violent this summer as police cleared out encampments across the city.

The news release announcing the latest arrests came hours after a group of homeless individuals and their supporters held a demonstration outside Mayor John Tory’s condo to call for charges to be dropped against the more than 50 people that were arrested or ticketed during this summer’s encampment clear-outs.

In a statement earlier in the day, Tory’s spokesperson Lawvin Hadisi criticized the demonstrators for gathering outside Tory’s home, calling it “political theatre.”

“This is definitely not the best way to engage in any serious dialogue,” she said. “Protesting outside someone's private home won't help get affordable housing built.”