Toronto police have identified about 100 street gangs in the city, according to an inspector with the service’s integrated gun and gang task force.

In an exclusive interview with CTV News Toronto, Insp. Joe Matthews said there has been an increase in what he calls “brazen daytime shootings” in the city as well as a rise in the use of devices that “modify semi-automatic guns to make them automatic.”

“It’s definitely a street gang turf war that’s going on. There’s a lot more brazenness in the gangster with the daytime shootings which we traditionally hadn’t seen,” Matthews said. 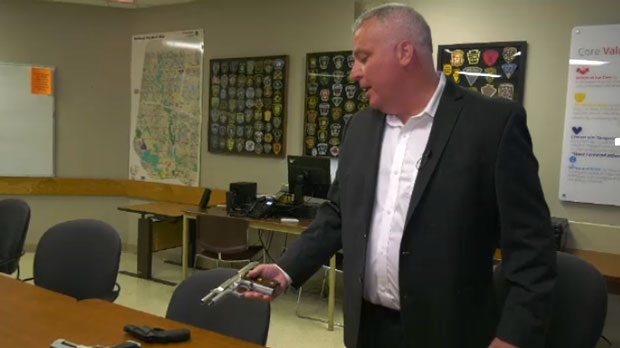 There have been at least 274 shootings in Toronto this year and police say many of them are targeted and gang-related.

"It’s all about money, it’s all about power, and it traditionally has been. It’s the brazenness now that’s come in the gangster and exactly the psychology why it’s happened I’m not quite certain of."

Since July 1, police have seized 56 guns that were used in a crime. About three-quarters of them come from the United States, which is why Toronto police are working closely with border authorities to stop the influx of illegal firearms.

While semi-automatic pistols are the most common type of guns seized in the city, Matthews said they are seeing more modified guns.

"We are seeing a little bit of an increase of the different types of devices that are put on firearms so there is that automatic rapid fire that will happen," he said. "And overcapacity magazines, we’re seeing them all the time as well."

A Toronto police officer investigates a shooting in the city. (CTV News Toronto)

The program, dubbed Project Community Space, was announced on Aug. 14 and involves an increased police presence in vulnerable neighbourhoods, more efforts to engage with communities and intelligence-gathering strategies.

Police have also created an Integrated Gang Prevention Task Force, which will hold 39 town hall meetings across the city starting in September.

"We’re trying to approach it from all angles and I’m confident we’re going to be able to make an impact," Matthews said.