TORONTO -- Police have released video footage of a person of interest wanted in connection with a seemingly random assault that took place in Whitby, Ont. last week and left a 50-year-old woman critically injured.

According to the victim’s family, the woman left her home to go on a jog around 8:15 p.m. on July 28. She was found the following day suffering from life-threatening injuries near a creek in the area of Taunton Road East and Anderson Street.

The family told CTV News Toronto over the weekend that the victim was on life support in a Toronto hospital. Police confirmed on Tuesday that she remains in critical condition.

Police have previously said they are not ruling out the possibility that the woman was injured in a random assault.

“As this investigation unfolds we might learned a little bit more but right now there is nothing to indicate why this person was targeted,” Durham Regional Police Acting Sgt. George Tudos said.

Investigators also released security video showing someone walking behind the woman on a sidewalk the night of the attack. The person of interest was seen walking westbound on Taunton Road, near Anderson Street, between 8:50 p.m. and 9 p.m.

“(The victim) is being followed by an unknown male who is about 150 feet behind her and keeping pace with her as she proceeds westbound on the sidewalk,” police said in a news release issued Tuesday.

Investigators have released security video that depicts a Person of Interest walking behind the 50 yr old female victim on a sidewalk on the night of the attack in Whitby last Tuesday night.

The person of interest has been described as a male with a medium build. He was last seen wearing a white T-shirt with dark sleeves, loose-fitting shorts with a dark horizontal stripe down the side and dark socks and dark shoes.

“It’s hard to say to how long this person was following the victim but I know that Taunton Road is a well-travelled street by cars and pedestrians so we’re hoping someone out there might have some information,” Tudos said.

Investigators are also asking anyone who may have been in the area, including drivers who may have dashboard camera footage, to contact police or reach out to Crime Stoppers anonymously.

A command post has been set up at in the area of Anderson Street and Promenade Drive and police are urging any witnesses to come see them. 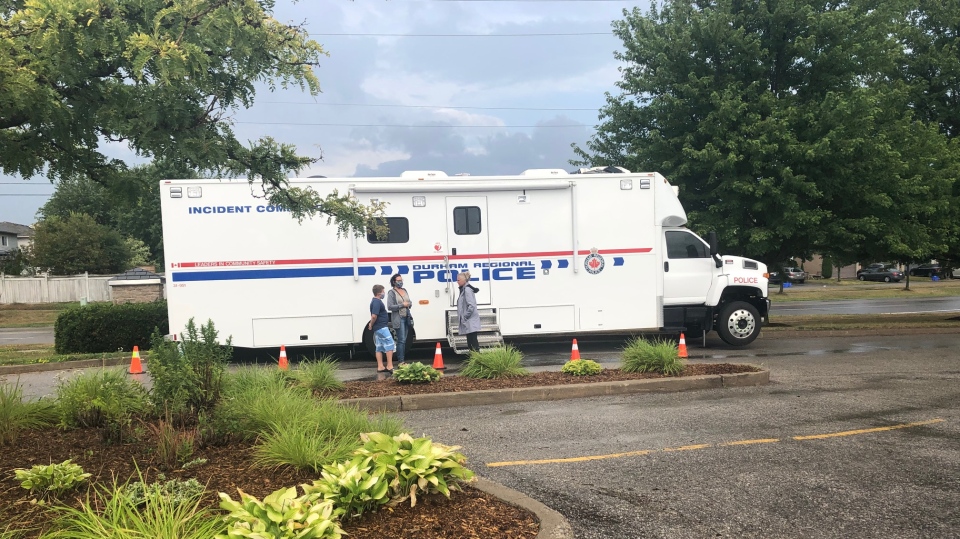 Whitby Mayor Don Mitchell told CTV News Toronto that the family of the victim has asked for privacy at this time.

"What I can say is that we all hope to see the perpetrator identified soon. Until then, I would urge residents to exercise caution and stay safe.”