Peel Regional Police have released new surveillance video of the alleged suspect in Saturday's shooting at a Mississauga gas station that left a 21-year-old woman dead.

The video was part of their post on YouTube, providing an update on the Dec. 3 shooting death of Pawanpreet Kaur that occurred at a Petro-Canada gas station near Creditview Road and Britannia Road West shortly after 10:30 p.m.

In the video, an individual believed to be the shooting suspect is seen riding a bicycle in the area minutes before the shooting. Police said the person was biking on Creditview Road, north of Sir Monty's Drive, at around 10 p.m. and again at Camgreen Circle shortly after that. Both locations were metres away from the gas station.

The bicycle, described as a maroon Sportek Ridgerunner mountain bike, has since been located by police, Insp. Todd Leach said in the update.
"This bicycle may have been stolen and police are appealing for anyone who may have a similar bike to check and ensure you're still in possession of it," Leach said. "If you find it is missing, please contact the homicide bureau even if you have already previously reported it stolen."
Police have previously said that Kaur was shot at close range and that she was targeted. They added that Kaur was working at the gas station at the time of the shooting.
Police also noted that the suspect was in the vicinity of the gas station three hours before the shooting.
The suspect was seen wearing a three-quarter-length dark winter jacket with a hood, dark winter boots, dark pants, a dark winter toque and white gloves and police said the suspect did not pull the hood over their head until shortly before the shooting.
The suspect was then seen running away from the station following the shooting, heading west across Creditview Road, west on Britannia Road, and west on Camgreen Circle. 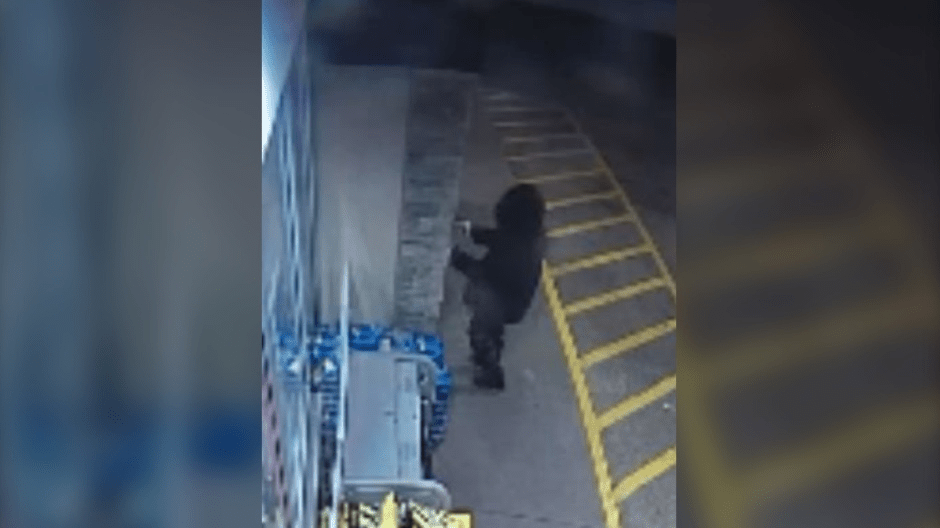 Suspect image released by Peel Regional Police. (PRP)
In addition to releasing the video, police also appealed on Wednesday to those who were in line for the car wash at the gas station and at a nearby KFC drive-thru that evening.
"We ask that anyone with a dash cam to review their footage between the hours of 6 p.m. and 12 a.m. as your camera may have vital evidence of what led up to this incident," Leach said.
"In order to protect the integrity of this investigation, we cannot provide further details at this time."
Police have not released the gender of the suspect or what led them to determine that the shooting was targeted.
Anyone with information is asked to contact homicide investigators at 905-453-3311 extension 3205 or Crime Stoppers at 1-800-222-TIPS.
With files from Joanna Lavoie and Jordan Fleguel