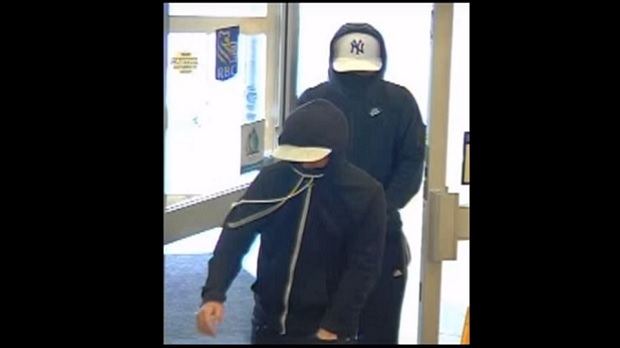 Police are searching for the two males seen in this screen grab from a security camera video at a bank in Scarborough. (Toronto Police)

In all three incidents, police said a lone male suspect entered the banks and concealed his face with a mask, a baseball cap and a hoodie.

The suspect then handed a handwritten note to the teller indicating he was robbing the bank and was armed with a gun.

Police allege the note demanded a specific amount of money.

The teller in each of these three incidents handed the male an undisclosed quantity of cash before he fled the scene.

On April 25, 2016, police said the same suspect and another male entered a bank in the Bathurst Street area just south of Steeles Avenue in Scarborough.

This time, police said the first suspect -- concealed by sunglasses, a scarf, a hat and a hood -- handed a note to the teller indicating he was robbing the bank and was armed with a weapon.

The first male was handed an undisclosed quantity of cash before both males fled the scene.

Police said no victims were reported injured in any of the incidents.

The first suspect is described as a white male, between the ages of 18 to 20, standing five-foot-five to five-foot-eight in height and weighing approximately 160 pounds.

The second suspect is described as a male with a possible olive complexion, between the ages of 18 to 20, standing five-foot-two to five-foot-four in height with a slim build.

In an effort to identify the suspects sought, police have released security camera video of the bank robbery that occurred on April 25.