Police have issued another warning about discarded syringes after a child discovered a needle at an elementary school in Toronto.

Police said on Monday about 8.45 a.m., a student found a discarded needle at the rear of Montrose Junior Public School, on Montrose Avenue, near Harbord Street.

Unaware of the risks, police said the child picked up the needle and later notified a teacher.

The teacher then searched property and located another needle. The child was not poked or injured, police said.

Patrick Bednarek’s six-year-old son goes to Montrose Junior Public School and he told CTV News Toronto the news of the discovery is “quite scary.”

“My wife and I try to do a pretty good job of giving him the tools he needs to sort of navigate his way through all sorts of obstacles he might come across at school,” he said.

“We sort of described what it would look like, and how it can make him very sick if he accidentally poked himself with it. So rule number one, don’t touch it and go and find the nearest adult, or teacher or principal to come have a look at it.”

Bednarek said that he and his wife just had a conversation with their son a week earlier after needles were found on the grounds of another Toronto public school.

Three children were taken to hospital on Sept. 4 after being poked by needles in the Roncesvalles Avenue and Dundas Avenue West area.

The children, who were unaware of the risks, picked up the syringes and were poked by the needles, police say.

The children were later taken to hospital and received medical care.

Amy Slater’s five-year-old daughter, Lily, was one of the children who were pricked by the needle. She said that the incident occurred on a school property.

“It’s about diseases right and the fact that she may have contracted a disease from the needles. So Hepatitis C, Hepatitis B (and) HIV are all things that we worry about,” she said. 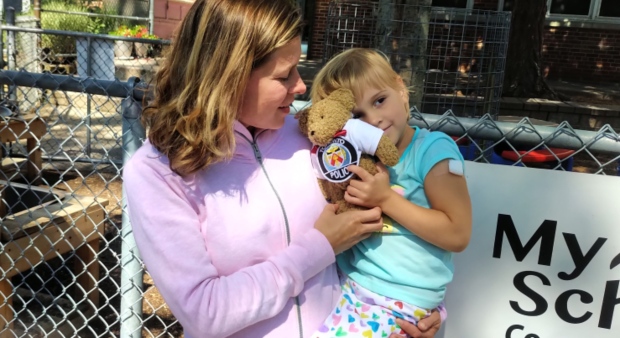 Montrose Junior Public School’s principal sent a letter home to parents on Monday informing them of the satiation and how it was being handled. The letter said that no students were harmed and that “(the school) informed our caretaking staff as they conduct daily and evening checks of building.”

“Please be assured our staff will continue to take any necessary steps to ensure the safety of students and staff,” the letter said.

At a news conference held on Tuesday, Toronto Mayor John Tory said he was pleased to hear that the school board was going to increase its vigilance around schoolyards when it comes to finding and collecting needles.

“The real problem is why are the syringes there, what is the underlying problem behind that, and what are we doing about it?” Tory said.

Tory says he will be paying close attention to what the federal parties are proposing as a solution to what he calls an epidemic in the city during the upcoming election campaign.

Police are asking parents to remind their children about the potential health and safety hazards of discarded syringes.