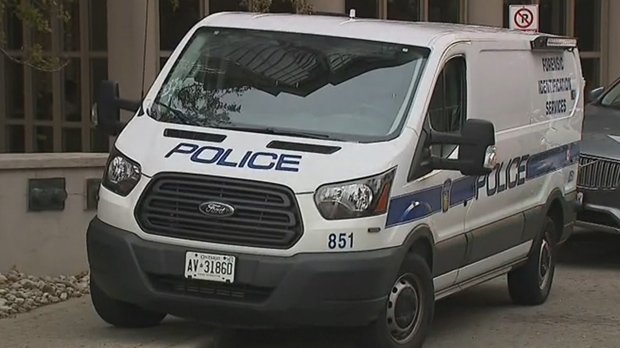 A police forensics van is seen on Four Springs Avenue in Mississauga after a woman was found dead and a toddler was located with serious injuries on Oct. 21, 2019. (CP24)

Police say they are investigating a suspicious death after a toddler was found injured near a dead body in Mississauga Monday afternoon.

Emergency crews were called to the area of Four Springs Avenue and Eglinton Avenue West, near Hurontario Street, around 3:35 p.m.

Police said that when officers arrived at the scene, they found a deceased woman inside an apartment unit.

A toddler, who was also inside the residence, was transported to a trauma centre for assessment, police said.

Police said there were no reported physical injuries to the toddler, however paramedics said that the child was transported to a hospital with serious injuries.

No further details have been released regarding the circumstances of the death.

Peel Regional Police's Homicide and Missing Persons Bureau is consulting with the case.

SUSPICIOUS CIRCUMSTANCES
-Call in at 3:35pm
-The area of Four Springs Avenue and Eglinton Avenue West #Mississauga
-Deceased person located in a unit
-A child in the residence was taken to a local hospital for assessment
-No physical injuries reported for child
-PR19-0386106 pic.twitter.com/Ex4eeG1wYj