On the morning of Aug. 4, Joti Singh Mann was getting into his parked Jeep when he was approached by a man wielding an axe.

Video obtained from the scene shows a suspect swinging the blade into the vehicle after Mann shut the car door.

Two other men then appear in the frame, one armed with a machete, and attack Mann. 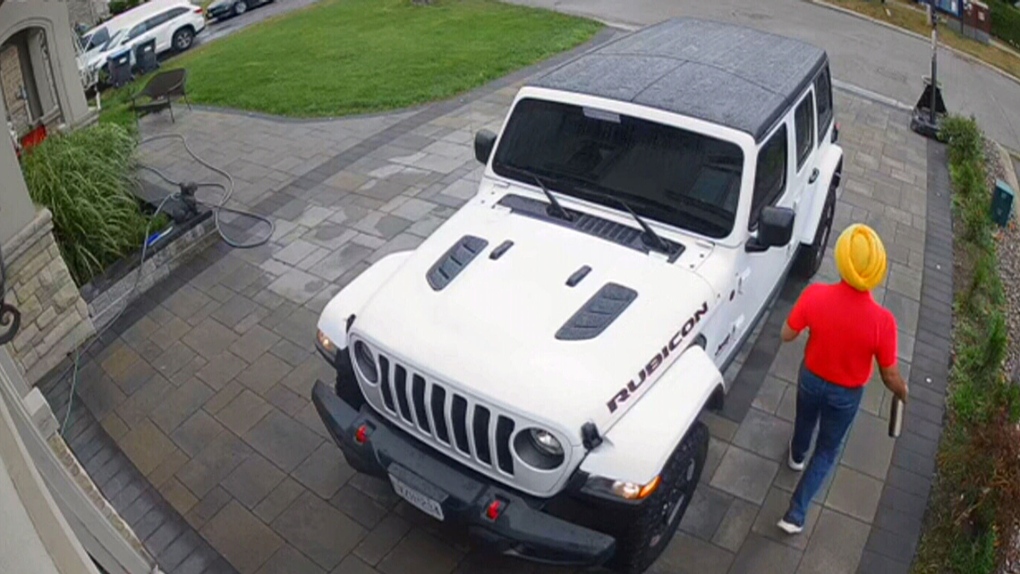 The three supsects pull Mann from his vehicle, bringing him to the end of the driveway, and continue to assault him. The violence only ends when a woman, identified as Mann’s mother, exits the home to render aid.

“She ran out – it was a pure reaction on her part and it certainly contributed to him still being here today,” Peel Regional Police Supt. Sean Gormley told reporters on Thursday.

Gormley said they have reason to believe Mann was targeted, but did not share what information police received to make that conclusion.

Mann is a real-estate agent and media personality in Brampton, who hosts a podcast and takes calls from the public.

Mann's mother told CP24 he received a threat while recording a recent episode of his podcast.

Gormley said police were made aware of that threat and were actively investigating it.

“A safety plan was put in place with victim at the time the threat was reported,” he said.

Brampton councillor Gurpreet Singh Dhillon said Mann suffered the loss of a big toe and use of one hand in the attack, and also received 150 stitches.

“Doctors say he will make a recovery but it will take a few months of rehabilitation to regain the use (of his hand), Dhillon said.

Dhillon also said Mann’s assault is the third violent incident involving a Punjabi language media personality in Brampton in the past 12 months.

In one instance, a media host’s home was the target of gunfire. In another, suspects confronted a media host with a gun as he was leaving his studio.

“Whether you agree or disagree with them, there shouldn’t be any violence against them, so we’re hopeful there are more leads in those investigations as well,” Dhillon said.

Gormley said there are active investigations underway for all three incidents, and he did not have information to suggest Mann’s assault was tied to the earlier incidents targeting other media personalities.

He said the three suspects in Mann’s assault, which he characterized as an attempted murder, wore mostly black clothing, black gloves and surgical masks covering their faces

Feds to lift border vaccine mandates, mandatory use of ArriveCan

The federal government is expected to officially announce the end of COVID-19 border restrictions today, including mandatory vaccinations, testing and quarantine of international travellers.

A gunman killed 13 people, including seven children, and wounded 21 other people in a school in central Russia on Monday, authorities said.

The recovery stage has begun after Fiona swept through Atlantic Canada, hundreds of troops have been deployed to help affected provinces, and many young Canadians feel they need an inheritance to reach their financial goals. Here's what you need to know to start your day.