Investigators said they were notified of the vandalism around lunch hour on Thursday after a citizen reported that the statue, located at Pierre Elliott Trudeau Park near Clark Avenue and Bathurst Street, had been damaged.

“Someone spray-painted the face of the former prime minister and unfortunately it is an act of vandalism and in these times I’m not sure what that accomplishes,” York Regional Police Sgt. Dave Mitchell told reporters at the scene. “It’s a disrespectful act and it’s vandalism.”

Aside from the colour of the former prime minister’s face, no other part of the statue appears to be damaged.

The City of Vaughan has sent crews to the area in order to repair the damage.

In a statement Thursday, Vaughan Mayor Maurizio Bevilacqua said he was "deeply disappointed" by the incident.

"Like so many Canadians, I admire Pierre Trudeau's commitment to fostering a fair and just society. His actions led to the creation of the Charter of Rights and Freedoms," he said.

"I want to recognize York Regional Police for taking immediate action and for launching an investigation.”

Depending on what the motivation was behind the vandalism, Mitchell said that the incident could be categorized as a hate crime. 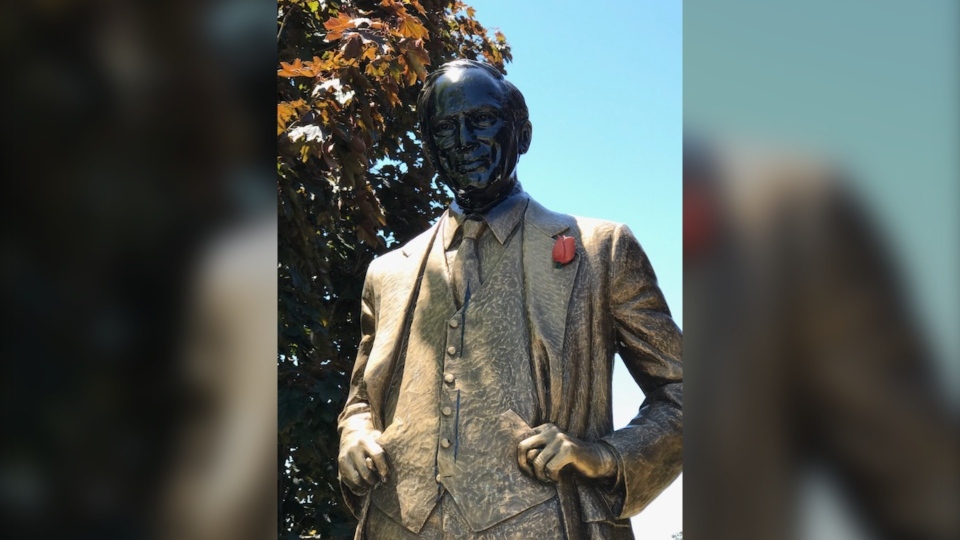 He added that forensic investigators were on scene collecting evidence and urged anyone who may have information about the incident to call police.

“It’s not doing anybody any good and every Canadian citizen, regardless, you should be offended by this kind of stuff,” he said. “It’s just disrespectful to everybody.”

The incident comes as statues and monuments of historical figures across the world are being vandalized and torn down amid a growing Black Lives Matter movement.

In Vaughan specifically, an online petition was launched to rename the city to “honour the people who made a positive, meaningful impact on our community.”

The city is named after British diplomat Benjamin Vaughan, a co-negotiator of the Peace of Paris treaties and advocate for Canadian interests in the face of proposed amalgamation by the United States.

What is not mentioned on the city’s website is that Benjamin Vaughan also owned several plantations and opposed the emancipation of slaves.

In response to the petition, the mayor submitted a resolution to council asking that the civic holiday usually named after Benjamin Vaughan instead honour John Graves Simcoe, the first Lieutenant-Governor of Upper Canada and a leading proponent of the Act Against Slavery.

Current Prime Minister Justin Trudeau, the son of Pierre Elliott Trudeau, has not officially commented on the incident.