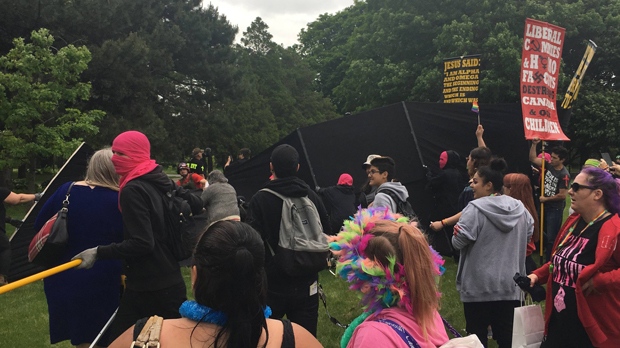 Police are looking for witnesses and video after religious anti-LGBTQ demonstrators fought with attendees of the Gage Park Pride Festival in Hamilton on Saturday afternoon.

Hamilton police spokesperson Jamie Penman said a religious group with banners suggesting gay people will be punished by God was spotted in the park, off of Main Street East this afternoon.

Participants in the Pride festival clashed with the demonstrators in full view of the police. Officers separated the two groups and said they escorted a number of people out of the park.

Penman said officers witnessed people who suffered “minor injuries” but nobody has come forward to report any injury to police.

Penman said anyone who was assaulted is urged to report the offence to police.

Images circulating on Twitter show men carrying banners saying “the wicked shall be cast into Hell,” and “Liberal commies and homo fascists are destroying Canada and our children.”

At one point LGBTQ activists were seen spreading a black fabric barrier across where the demonstrators were standing.