A man who allegedly stabbed a woman and held a child inside a Scarborough home was fatally shot by Toronto police officers following an interaction on Saturday afternoon.

The Special Investigations Unit (SIU) has invoked its mandate and is looking into the circumstances surrounding the incident that occurred near Midland Avenue and Kingston Road.

According to Toronto police, officers were initially called to that area around 2:30 p.m. for reports that a woman had been stabbed.

The SIU said a 42-year-old man suspected of stabbing the woman subsequently took hold of a child and went inside a residence.

When police finally arrived, they learned that the suspect was still inside the home with the child.

Toronto police Chief James Ramer said officers shortly became involved in an interaction with the man. According to the SIU, three officers shot the man.

He was taken to the hospital, where he was pronounced dead. The SIU said a post-mortem exam is scheduled for Sunday. 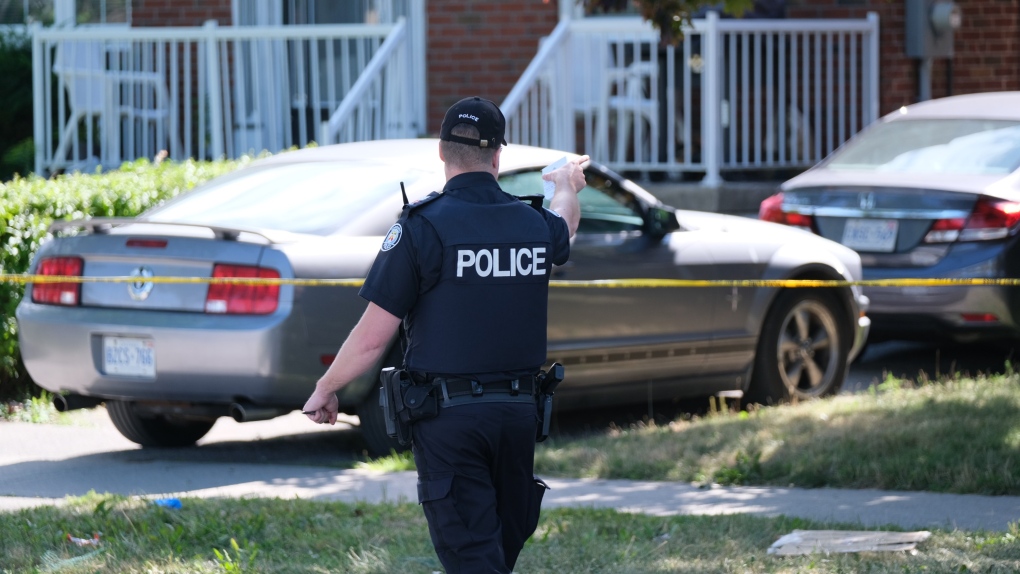 Toronto police are on the scene of a stabbing and shooting in Scarborough. (Simon Sheehan/CP24)

Ramer said the woman who got stabbed suffered serious injuries. She was transported to the hospital and is now in stable condition.

Meanwhile, the child was not physically injured in the incident. It was not immediately clear what's the relationship of the suspect to the victim and the child.

Ramer would not disclose further details about what occurred, noting that the province's police watchdog is now involved.

"The SIU is going to investigate the incident, the interaction between the individual and the police. And then we will, at the same time, simultaneously investigate the original incident and the stabbing of the female," he said.

"It's a tragic incident when officers are having to deal with these situations and deal with individuals under any circumstances. And all deaths are tragic and it has a huge impact on the officers that are involved as well."

The SIU, which is called to investigate the conduct of police that may have resulted in death, serious injury or sexual assault, has assigned three investigators and three forensic investigators to the case, which involves three subject officers and four witness officers.

Jan Higgins, a long-time resident in the neighbourhood, was shocked and saddened about the incident.

She says it is not something she has seen happen in the area before.

Another woman who lives on the street called the incident "traumatic."

"It's incredibly scary that something like this is actually happening in the neighbourhood. It's a quiet neighbourhood," she said. "I'm really shocked that this type of violence is occurring in this day and age."

I’ve arrived on scene at Midland Ave & St. Clair Ave E at the Stabbing incident. I will be speaking to investigators along with our Duty Senior officer, and will update the public & media when I can. pic.twitter.com/oulIvu9rNC

Climate change will make home insurance more expensive for all of us and unaffordable for some, experts say

A former National Security Agency employee from Colorado is accused of trying to sell classified information to a hostile foreign government in an attempt to pay off his debts and 'help balance' the world's scales, according to court documents released Thursday.

Helium shortage 4.0 continues, and it's not just bad for party balloons

This northern territory is the set of Indigenous-focused slasher movie

Canada's largest territory is the backdrop of an Indigenous-focused alien movie that follows a ragtag group of teens fighting to save their community.

Thanks to the James Webb Space Telescope, a team of Canadian astronomers were able to spot the most distant and possibly the oldest star clusters ever discovered.

Father and teen charged with fatal shooting of rapper at L.A. restaurant

A man who was arrested in Las Vegas on Thursday, and his 17-year-old son, were charged with murder in the fatal shooting of rapper PnB Rock at a South Los Angeles restaurant, authorities said.

The Supreme Court of Canada will not hear an appeal of a decision that ordered a third trial for a woman who has twice been convicted of killing her two daughters.