Police cruiser runs over suspect during chase through downtown Toronto

TORONTO -- The province’s police watchdog has invoked its mandate after a police cruiser was caught on video running over a suspect during a pursuit downtown on Sunday evening.

Toronto police said they responded to the area of Bathurst Street and King Street West just after 6:00 p.m. for reports of a person with a knife.

When officers arrived, the man was located wielding a knife and was subsequently arrested, police said.

The moments between when the officers arrived and when the suspect was arrested were caught on video by residents in the area. A number of videos of the incident have been posted on social media.

In one of the videos, a suspect is seen being chased by officers and police cruisers as the man tried to evade arrest, running south on an almost empty Bathurst Street. 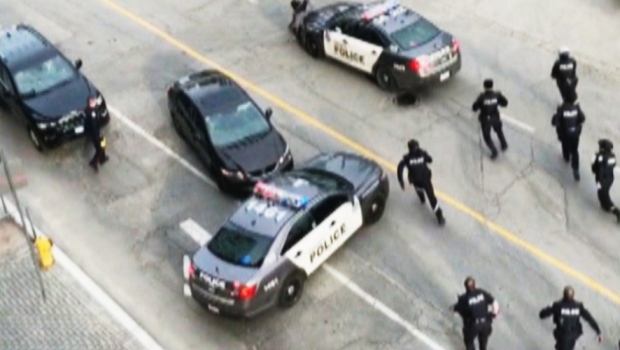 Two of the officers appear to have their weapons drawn while they were pursuing the suspect.

It is not known how long the pursuit was. However, the suspect was apprehended four blocks away on Front and Bathurst streets.

In another video moments before the man was caught, a police car appears to have run over the suspect. The video then shows several officers pinning down the suspect and handcuffing him.

Emily Loucks, who lives in a building in the area, said she and her boyfriend were inside their unit when they heard screaming and police sirens outside.

Loucks said they went to look on their third-floor balcony, which overlooks Bathurst and Front and saw the suspect running with a knife and dozens of police officers following.

“The police officer hit him with the front of his vehicle, and then ran him over with his front tire. And that’s when he finally went down and the weapon he was holding, which was a huge knife, went flying,” she said.

Before that, Loucks said officers were trying to use their Taser to subdue him.

“It was really disturbing,” she said.

She said they even heard the man yell he was suicidal and that he just wanted to be taken to a shelter.

“It’s scary,” Loucks said. “He was just saying the same things over and over again.”

Two people, the suspect and a police officer, were taken to hospital with minor injuries, Toronto paramedics said.

Earlier, a spokesperson for the Special Investigations Unit (SIU), which investigates reports involving police where there has been death, serious injury or allegations of sexual assault, said Toronto police was in touch with the agency regarding the incident.

"We’ve learned that the man sustained a serious injury during his interaction with police officers today. As such, the SIU has invoked its mandate," the agency said in a statement.

Toronto police said the area of Bathurst Street and King Street West is closed for investigation.