Four people are in hospital with non-life threatening injuries after an apparent shootout in the city’s west end that Police Chief Mark Saunders says has “all the earmarkings of street gang subculture.”

Police were first dispatched to a plaza in the vicinity of Glencairn and Marlee avenues at around 1 a.m. for a report of shots fired.

Once on scene, officers located two shooting victims. Police say that after about two hours went by they then received a call from a third victim who said that he was hiding in a portable washroom in the area. That victim was located with a gunshot wound and was also taken to hospital for treatment. The fourth victim, meanwhile, later showed up to hospital on his own.

Speaking with reporters at nearby 13 Division on Saturday afternoon, Saunders said that preliminary information suggests that there were three suspects who got out of a dark-coloured sedan and opened fire on a group of individuals that were attending a bar in the area. He said that at least one of the victims is believed to have returned fire.

More than 30 shots were fired, according to Saunders. 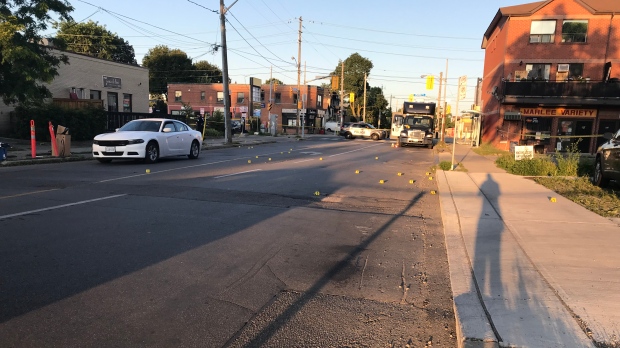 Evidence markers are shown marking the location of shell casings at a shooting investigation near Glencairn and Marlee avenues on Saturday morning. (Brandon Gonez)

“It was a vehicle waiting so the driver remained in the vehicle and the plan was for the three (suspects) to get out and shoot at one of the intended targets or three of the intended targets and then return to the car,” he said. “I can also tell you that when the shots went off our officers were able to hear those shots and responded quickly but when you have these targeted shootings they have their access points and their (getaway) plan so we are unable to locate them right now.”

Saunders said that three of the victims were together while a fourth was at an adjacent restaurant and appears to have just been “in the wrong place at the wrong time.”

He said that one of the victims “has a history of gun violence” and twice served time for firearms-related offences.

“We are trying to get information out of the victims and no one is cooperating,” he said. “Three for sure have no intention of helping with the investigation.”

One stray bullet from the shooting went through the window of an apartment while others struck a patio and a number of parked vehicles in the area.

Saunders said that police are currently canvassing the surrounding area for witnesses and potential video surveillance. 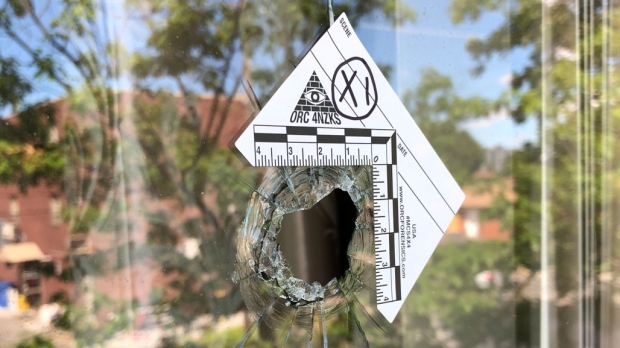 He said that additional officers will also be place in the neighbourhood in the wake of the shooting, though he conceded that it is impossible for them to be everywhere at once.

“When street gangs are shooting others two things have to connect. One there target has to be present and two the police have to not be present. So I can put more officers out on the road but at some point in time there will not be an officer right there and the person they are looking for will be right there and they will shoot,” he said. “It is very reactive, it is very planned and my fear is that they (street gangs) have no respect for the rest of the public, the 99.9 per cent of the community, and they will shoot at will. Today is a case of that.”

The shooting occurred about 300 metres away from another plaza on Marlee Avenue, where a man was shot back in April.

About 15 shots were fired in that shooting with at least one of them striking the victim in his leg.

Speaking with CP24 at the scene on Saturday, Ward 8 counillor Mike Colle said that something needs to be done about all of the violence.

“When we had the shootings in April we brought in extra police, the police were here undercover and also on the street so what this really demonstrated is that Toronto police cannot stop this gun violence by themselves. They are working overtime, they are doing everything they can down at 13 division but we need some serious help,” he said. “We need the RCMP to stop the guns from coming across the border, we need the OPP to come here and help and we need to bring back provincial parliament back from vacation and pass some tough laws. If you commit a gun crime, no bail. If you drive around the city with guns in your car you should lose your car and lose your license.”

There have been a total of 274 shootings in the city so far in 2019, which represents a five-year high.

Colle compared it to a fire while speaking with CP24. He said that while investments need to be made in community programming to stop young people from becoming involved with gangs and crime, more needs to be done right now to stop the gun violence.

“The thing is there is a fire going on. This gun violence needs to be put out before we can do the good things. Right now we can’t even offer people a walk up and down the street so let’s find ways to put out this fire,” he said. “Right ow we are too soft on this gun crime and they (criminals) know it, they don’t fear the consequence. Lets’ put out the fire first and then we can continue to work on the longtime causes.”