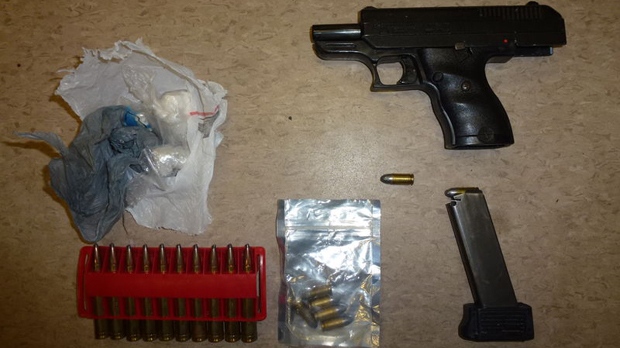 A handgun, ammunition and drugs found on Aug. 31, 2018 are shown in a TPS handout image.

Police have charged a man they believe to be the intended target of a daylight shooting at a Scarborough playground that injured two young girls back in June.

Shots rang out into a crowded playground on Alton Towers Circle around 5 p.m. on June 14, injuring two sisters, ages five and nine.

The five-year-old sustained a gunshot wound to her abdomen and the nine-year-old was shot in the ankle.

Police say they believe the shooters were targeting a man who was at the playground with his child. The suspects fled in a vehicle.

Two suspects have already been charged in connection with the incident.

One of the suspects, identified by police as 21-year-old Sheldon Eriya, was arrested in Pickering the day after the shooting while the second suspect was taken into custody by provincial police on Aug. 22 in Algonquin Highands. Police say that 23-year-old Tarrick Rhoden was hiding out in a cottage in the area.

They have been charged with attempted murder and two counts each of aggravated assault.

On Friday morning, investigators say they executed a search warrant at a residence near Eglinton Avenue East and McCowan Road.

Officers found a loaded 9mm semi-automatic handgun, various rounds of ammunition and an undisclosed quantity of crack cocaine and heroin.

Police also allege that McDonald was the intended target of the shooting.

He is scheduled to appear in court at Old City Hall on Sept. 1.

A Canada-wide arrest warrant was issued for a fourth suspect, identified by police as 23-year-old T’Quan Robertson from Toronto, but he remains outstanding. He is also wanted for attempted murder and aggravated assault.

Anyone with information is being asked to contact police or to reach out to Crime Stoppers anonymously.