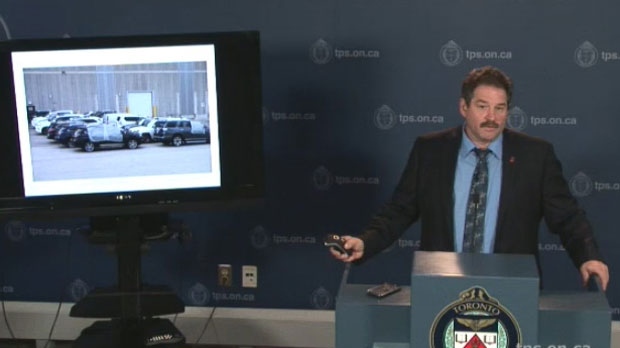 Police provide details about an investigation into a high-end vehicle theft ring.

An ongoing police investigation into a high-end vehicle theft ring has led to the arrest of another Toronto man, police say.

An investigation led by Toronto police into the trafficking of high-end vehicles overseas, dubbed ‘Project CBG,’ targeted an alleged theft ring accused of stealing luxury cars in Canada and shipping them to Ghana and Nigeria

The investigation, launched in April 2015, has led to the arrest of close to 20 people.

Since December, police said approximately 200 vehicles have been recovered at an estimated total value of $11 million.

Police allege that some of the vehicles were fitted with fake VIN numbers and were either used by suspects involved in the scheme or sold to unsuspecting customers.

The kinds of vehicles predominately targeted in the theft ring include Acura, Lexus and Toyota SUVs, police said.

Kevaughan Coore, 27, faces numerous charges including 26 counts of uttering forged documents, commission of an offence for a criminal organization in motor vehicle theft, conspiracy to commit an indictable offence, and obstructing a peace officer.

He made an appearance in court on Thursday.