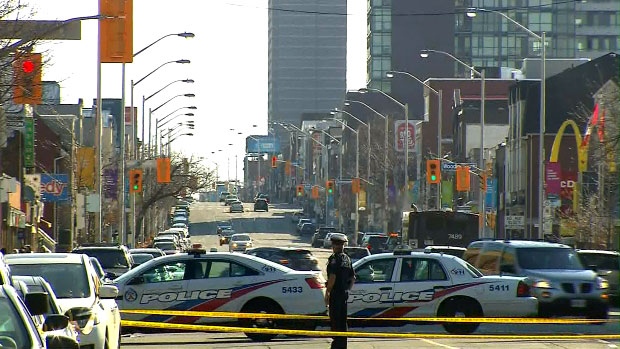 Toronto police are on the scene of a fatal shooting near Danforth and Coxwell Sunday morning.

A 24-year-old man has been charged in connection with a fatal drive-by shooting on Danforth Avenue that left a 20-year-old man dead back in April 2016.

The victim – identified as Abdullah Farah – was shot to death on a busy sidewalk in the area of Danforth and Coxwell avenues at around 1:30 a.m. on April 17, 2016.

Police previously said that they believe the victim was shot after being refused entry into the Cloud Nine Café, which was in the area. Officers noted at the time that the victim was targeted but no information on any possible motive was released.

Speaking with reporters after the incident, family members of the victim said they were disturbed by suggestions that Farah had any sort of involvement with the criminal world.

“Our brother was killed by a bullet and we don’t want his character assassinated as well,” his sister Ifrah Farah said.

Initially, police did not provide any suspect descriptions in connection with the incident. Officers did note that a white, four-door sedan was seen fleeing the scene of the shooting at a “high rate of speed” before running a red light while travelling north on Coxwell Avenue.

A few days after the shooting, police released surveillance camera footage that showed the victim arriving in the area with two other people. The video showed a vehicle drive past the group three times before allegedly opening fire.

Police said they did not know how many people were in the suspect vehicle at the time.

On Wednesday, a suspect – identified as Brampton-resident Trestan Brown – was charged with second-degree murder in connection with the fatal shooting.

Brown is scheduled to appear in court on Monday.

Police did not say if they are searching for any additional suspects wanted in connection with the case.