Police block highway ramp above where Mariam was found 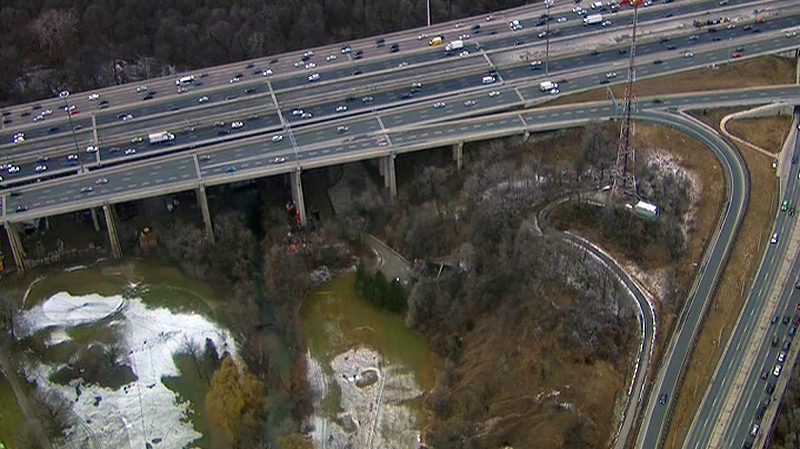 Human remains were found in a wooded area near Highway 401 and Yonge Street in Toronto.

Toronto police have blocked off the ramp they believe Mariam Makhniashvili jumped or fell from, as part of their continued investigation into the teenager's death.

The ramp from the eastbound lanes of Highway 401 to Yonge Street has been closed since about 11 a.m. Friday. Several officials could be seen looking over the ramp's concrete barrier.

Makhniashvili went missing in September 2009, sparking the largest missing person's search in Toronto police history. Her remains were finally located in a wooded area at the Don Valley Golf Course, below the ramp, in late February.

Police say Makhniashvili was likely alive when she fell from the bridge, pointing to suicide as a probable cause of death. They have ruled out foul play, but many questions remain about how the girl spent her final day.

The funeral chapel holds only 100 people. Makhniashvili's remains will be cremated after the funeral.

It is unclear whether the girl's father, Vakhtang Makhniashvili, will be able to attend. He is currently serving a six-year prison sentence for three stabbings.

In 2010, the year after his daughter went missing, he stabbed a neighbour he accused of being involved in her disappearance, and later stabbed both members of a couple that had posted bail for him after the first incident. His lawyer said this week that he is working on the paperwork to allow Vakhtang to be at the funeral.

Mariam moved to Canada from the Republic of Georgia just three months before her disappearance. She spoke little English and left behind her backpack and her books, which were discovered a month after she went missing.