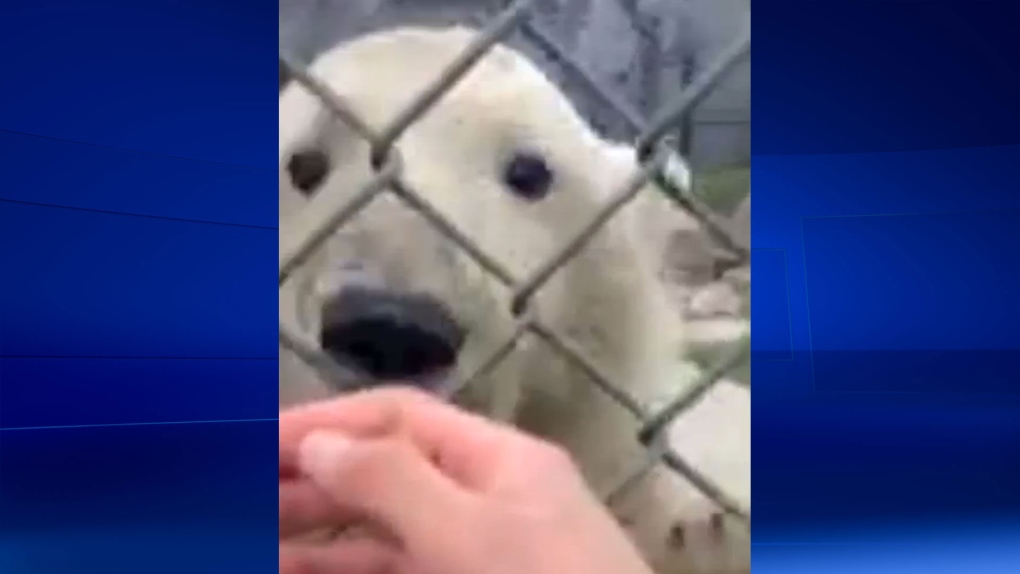 Samuel Gonzalez extends his hand to Humphrey the polar bear cub at the Toronto Zoo in a cellphone video he filmed in March.

A group of high school students sparked an investigation by Toronto Zoo officials and their school board after hopping a barrier to snap a close up with a polar bear cub.

In a video shot on a school trip in March, two students can be seen hopping a barrier and approaching the chain-link fence behind which Humphrey the bear cub is pacing back and forth.

The boy hands the cellphone he’s using to record the escapade to his friend, then holds his hand up to the bear, and the bear licks his hand through the fence. His face later appears in the frame as a girl's hand reaches through the fence to pet the bear. Reports have identified the pair as Samuel Gonzalez, 16, and Georgianna Nagy, also 16.

Gonzalez then hurries to take a photo, saying, "Someone's coming."

In front of the polar bear exhibit, there is a barrier with a sign that warns visitors not to cross toward the chain-link fence.

The zoo said there is always a safety risk for humans and animals when they come so close together.

A Toronto Zoo representative said that the zoo is working with Michael Power/St. Joseph High School in Mississauga to determine an appropriate punishment for the teens.

Zoo officials are using the video as part of the investigation, but said that, despite media reports, the students have not been banned from the zoo.

Seven-month old cub Humphrey is one of the zoo's star attractions, and his life has been well-documented through photos and YouTube videos since his birth in November.

The zoo posted photos and videos of the bear's shaky first steps and first time playing in the snow, and asked the public to vote to determine his name.