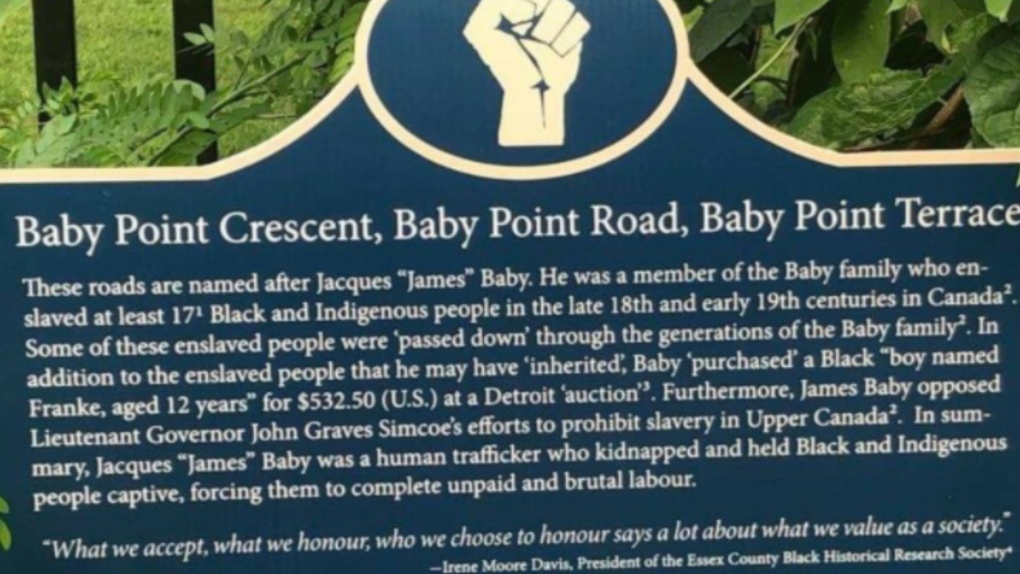 Plaques like these have popped up around Toronto and are the work of a person who wants to remain anonymous. (Twitter / @IreneMooreDavi1)

TORONTO -- Plaques that have appeared in different parts of Toronto exposing the truth about prominent slave-owning families is believed to be the work of one person who wants to remain anonymous.

At least five temporary plaques were spotted in Toronto over the last week that included details about past slave-owners who now have things named after them in the city.

Essex County Black Historical Research Society president Irene Moore Davis, who is quoted on the plaques, told CTV News Toronto the person responsible for them came forward to her this weekend and revealed why they were created.

"They let me know that they're actually not a person of colour but they just wanted to do something supportive," Davis told CTV News Toronto on Monday. "They were inspired after doing some reading."

The plaques show a list of streets or places named after prominent individuals and then explain their relationship with Black history.

For example, one of the plaques was put in the Baby Point area in Toronto, near Jane and Bloor streets.

Update: The person responsible has come forward. It's not an organization or even a committee... just one Toronto resident who wants to right the record. The person wishes to remain anonymous so I will honour that request. Nothing but love and respect!

"These roads are named after Jacques 'James' Baby. He was a member of the Baby family who enslaved at least 17 Black and Indigenous people in the late 18th and early 19th centuries in Canada," the plaque reads.

Another plaque is about the Jarvis family. It says that William Jarvis enslaved six people in York in the 18th century.

"When John Graves Simcoe sought to make slavery illegal in Upper Canada in 1793, Jarvis vehemently opposed him, which meant that enslavement was gradually phased out instead of being abolished."

The plaques also include a quote from Davis that reads: "What we accept, what we honour, who we choose to honour, says a lot about what we value as a society.”

Davis said that while she gives the plaques a "double thumbs up" she wishes the person would reveal themselves to the public so that they can work with the city or various organizations to make them permanent.

It is unclear how many of the temporary plaques remain.

"I think it's a great start," Davis said, adding they give a more real picture of these people's history. "They're excellent signs."

"It's really contributed to the national conversation that we're all having about the complex history of, you know, many prominent Canadian individuals."